The Nez Rouge is a theatre boat moored in the Bassin de la Villette opposite 13 quai de Loire from September to June. 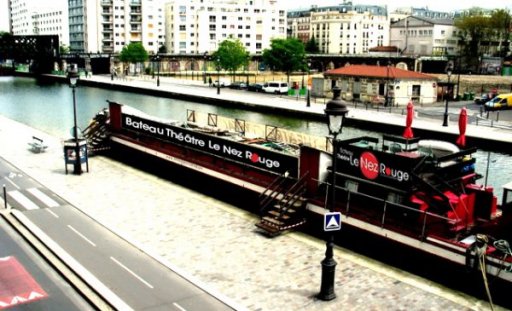 Le Nez Rouge offers a program of stand-up, one-man and one-woman shows and concerts. You can consult the Nez Rouge programme.

Comedian Gérald Dahan took over the management of this showboat in 2016, which was created by Michel Galabru in 1986. It is the oldest sailing theatre boat in France. It is named “the Red Nose”, the nickname of the boats in the Solvay fleet, of which it is the last. The Belgian company had 230 coal and sodium transport ships built.

Le Nez Rouge is accessible by Metro (Crimee or Ourcq). Contact the Nez Rouge theatre by email (contact[at]lenezrouge.com) or by phone on 01 42 00 71 99.