Between Paris and Saint-Denis 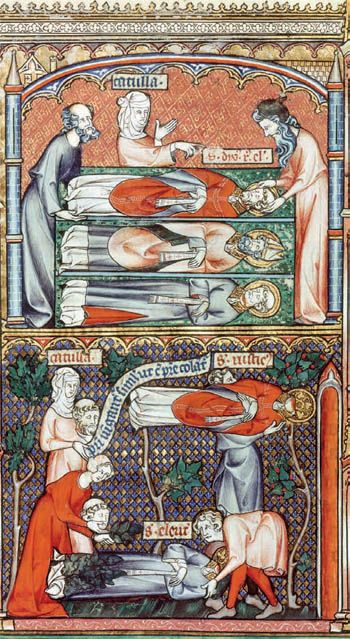 According to historic accounts, Denis was said to have been martyred in Paris and buried in Saint-Denis.

The place of martyrdom

The first Passions of saint Denis all agree on the place of his martyrdom in Paris, about six Roman miles from his place of burial, which corresponds to the nine or so kilometres that separate the centre of Saint-Denis from Ile de la Cité today. Only the anonymous author of « la Vie de sainte Geneviève » - The life of sainte Geneviève claims that, on the contrary, Denis was beheaded at the place he was buried (fig.6).

This choice of location can no doubt be explained by the following context : at the end of the 5th century, Geneviève, a partisan of Clovis, held a high function in the city of Paris. Yet, the bishop belonged to the opposit side run by the Roman Commander Syagrius, allied with the Wisigoths. Prior to Clovis’ victory over Syagrius (486), it was in Geneviève’s interest to stop the worship of Denis from taking hold in Paris under control of the bishop. If the martyrdom was to take place in Saint-Denis and not in Paris, the basilica of Saint-Denis could maintain its monopoly on the cult of devotion.

With this logic in mind, historic acccounts insisted on the particular status of Saint-Denis : a cultivated field appertaining to the property of a Pagan aristocrat, according to the Passion. It was from her name, Catulla, that the former name of Saint-Denis derived, Catullacum, that in turn became vicus Catulacensis in 520, as it is called in the « Vie de sainte Geneviève » - the life of sainte Geneviève. According to legend, it was here that Catulla concealed the bodies of the three martyrs (fig.7, ci-contre). The shrine built subsequently on their tombs by Christians could be considered private property. However, the bishop of Paris was determined to exercise control over this rapidly growing devotion and to limit it to Paris. From Merovingian times, standing tensions arose between the Paris clergy and groups serving the basilica concerning the worship of saint Denis. It was thanks to royal support that the basilica could finally secure its rights : from the beginning of the 7th century, it became a powerful monastery placed under the protection of kings Clothar II and Dagobert I. They held close ties with the palace of Clichy nearby, which had become the preferred residence of the royal court. King Dagobert increased donations in favour of the monks and enriched the basilica fig.8 the place where he had chosen to be buried. In 639, he was not to know that he had started thus, a long tradition of royal burials in Saint-Denis.

It was within this context that a new version of the Passion of Denis was written up before the end of the 7th century. In order to try to resolve all confutation concerning the place of martyrdom , the author insinuated that the beheading of Denis and his three companions (fig.9) actually took place on a hill situated betwen Paris and Saint-Denis, that the third biographer, abbot Hilduin of Saint-Denis, from 814 to 840, identified- in all probability – as Montmartre, the « Mont du martyre” – the Mount of Martyrs. However, servants of the basilica feared that the bishop of Paris might transfer the precious bodies to a Paris church. Thus began the famous legend of Denis, who, after his beheading, picked up his head and walked the long distance to Saint-Denis thus claiming through this miracle his desire to be buried at this place.

From Denis of Paris to Denys the areopagite  >>