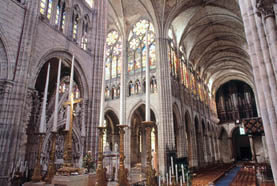 A masterpiece of gothic art and final resting place of the kings of France. The former abbey of Saint Denis is witness to centuries of the spiritual, political and artistic history of France. Discover the cathedral basilica, a jewel of gothic art and royal necropolis. Visit the archaeological crypt and burial site of Saint Denis, eight recumbent effigies commissioned by Saint Louis, the tomb of king Dagobert and 60 other sculpted tombs.

Plan Vigipirate: As part of the Vigipirate plan (security alert), we cannot accept visitors with  luggage exceeding 40 cm x 30 cm. At the entrance, security agents will ask you to open your bags.

Burial ground of the kings of France

From the high Middle Ages, this monastery has always managed to link its destiny to that of royalty thus affirming itself little by little as the priviledged burial ground of the royal dynasties committed to the faith of Saint Denis. Forty two kings, thirty two queens, sixty three princes and princesses, ten nobles of the kingdom are laid to rest here. The merovingians and Dagobert, through to the carolingians such as Pépin the Short, right up to the Bourbons, with the praying statues of  Louis XVI and Marie-Antoinette, The royal necropolis of Saint Denis was the priviledged witness to the history of France.

With more than 70 recumbent effigies and imposing tombs, the necropolis of the basilica is considered today as the most important ensemble of funerary sculptures dating from the 12th to the 16th century. The cathedral basilica of Saint-Denis shelters funeral effigies of illustrious figures such as Francis I of France, or Henry II of France and Catherine of Medici, Louis XII and Anne of Britanny and other less known figures such as Bertrand du Guesclin, crown servant, Jean et Blanche de France, children of Saint-Louis and also Louis X the Stubborn.

Adornment of the church

Will the Basilica reassemble its spire ?

The project to reassemble the north tower and spire of the St-Denis Basilica is currently under study. The tower and spire would be reassembled according to the plans of François Debret, the architect who was in charge of restoring the Basilica in the 19th century. Find out more about reassembling the spire.

Return of the kings

In 1793, revolutionaries attacked the symbols of the monarchy but the basilica was saved from total destruction. In 1806, Napoleon 1st ordered the building to be restored. Then, Louis XVIII restored the function of necropolis to the abbey. Restoration works were carried out throughout the 19th century and were directed by architects Debret and after Viollet-le-Duc from 1846. In 1966, the basilica became a cathedral, seat of the Bishop of Saint-Denis.

The church was built upon a Gallo-Roman cemetery, the burial site of saint-Denis martyrised around 250. In addition to the Carolingian crypt, remnants of the building consecrated under Charlemagne in 775, the basilica has managed to preserve two buildings, an outstanding testimony to the evolution of religious architecture : Suger’s apse (1144) with a new phase of gothic art, rebuilt portions of the abbey, at the request of Saint Louis, and a transept of exceptional size to house the royal tombs. The hundred years’ war, religious wars, political unrest all contributed to the decline of the abbey church of Saint-Denis well before the Revolution precipitated its downfall.

Individual visits to the Basilica

Open tours : a simple option, you can discover the basilica at your own pace in your own time. A free guided-tour brochure in French, English, German, Spanish, Italian, Portuguese, Russian, and Japanese is at your disposal. These information leaflets are complemented by several information panels set up throughout your visit.

A guided tour in French that lasts an hour and a half is organised everyday (from Monday to Saturday at 11.00 a.m. and 3 p.m., on Sunday at 12.30 p.m. and 3 p.m.). The self-guided visit allows you to discover the basilica at your own pace and lasts about one hour and a quarter. (Audioguides are proposed in French, English, German, Spanish and Italian).

The Basilica regularly organises exhibitions, concerts and activites for children during the school holidays : do not miss out on the Heritage open days or the Saint-Denis festival. 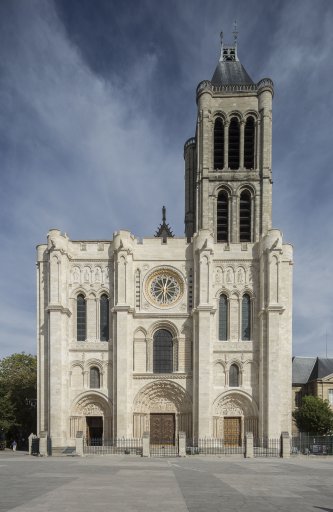 The former abbey of Saint Denis illuminated centuries of artistic, political and spiritual history of the aristocratic Franks. The church is built upon a gallo-roman cemetery, the burial place of saint Denis martyred around 250. As well as a Carolingian crypt, vestige of the edifice consecrated by Charlemagne in 775, the basilica bears witness to two buildings decisive in the evolution of religious architecture : Abbot Suger's chevet (1144), (the east end of church including the apse and ambulatory) a genuine hymn to uninterrupted light and epitomizing the novel gothic style. And the reconstructed part, during the time of Saint Louis, where a very large transept was built in order to meet the needs of the royal necropolis.

The One-Hundred-Years' War, the religious wars, political unrest led to the gradual decline of the abbey long before the revolution arrived. In 1793, the revolutionaries attacked the symbols of the monarchy but the basilica managed to escape total destruction. In 1806, Napoleon 1st ordered the restoration of the building. And then, Louis XVIII ordered the restoration of the royal necropolis. Large restoration works continued throughout the 19th century under the supervision of architects Debret and then Viollet-le-Duc from 1846. In 1966, the basilica became a cathedral, see of the bishopric of Saint-Denis.

Entrance to the Basilica is free on the 1st Sunday of the month from November to march.

The teaching and learning department in the Basilica proposes workshops and activities all year long to school groups and leisure centres, with the help of Heritage coordinators.

Saint-Denis Basilica is open to all, wheelchair accessible and has obtained the label "Accessible tourism" to welcome visitors with impaired hearing and intellectual disability. Visits adapted for all types of handicap are proposed all year long. Consult our page on group and school visits for more information.