Louis XVIII and the return of the monarchy

In 1814, Louis XVIII ascended to the throne. The king commissione 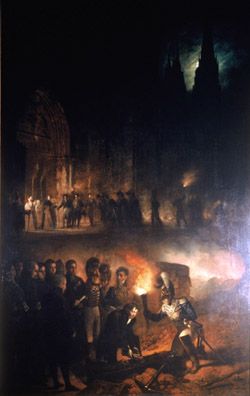 d relentless work on restoring to the basilica its charm as a royal necropolis. He first ordered a search in the adjacent cemetery for the ashes of the kings exhumed by the Revolutionary authorities. After a week of work, several royal remains were unearthed and placed in an ossuary, which can still be seen in the crypt today.

On January 21, 1815, the day of the anniversary of the death of Louis XVI, he decided to transfer to Saint-Denis, with great ceremony, from the cemetery of the Madeleine (now the Chapelle Expiatoire) the ashes of the guillotined king and of Marie-Antoinette. He also had returned the remains of Louis VII and Louise de Lorraine, the wife of Henri III. The six marble tombstones in the crypt were made in 1975 as a testimony of the re-burials. One of them, bearing no inscription, was intended to mark the grave of Charles X, the brother of Louis XVI and Louis XVIII, who died in exile in 1836 and was buried in a monastery in present-day Slovenia near Gorizia. It had been intended to return his ashes and remains some years ago but the plan came to nothing.

On June 8, 2004, the Mémorial de France organised the placing during a high mass of what was presumed to be the heart of Louis XVII, the son of XVI and Marie Antoinette, in the Bourbon family crypt. The symbolic date was chosen as a commemoration of the death of the “child of the Temple” on June 8, 1795, or 20 Prairial Year II of the Revolutionary calendar. The heart is now laid to rest in the cenotaph built at the request of his uncle and successor Louis XVIII.