The archaeological crypt, the origins of Saint-Denis 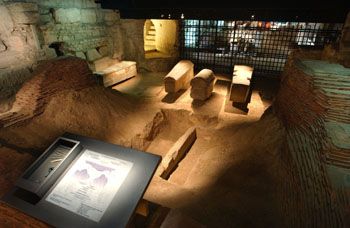 The existence of the necropolis underneath the basilica had been made known since the 19th century. In 1859, Viollet-le-Duc undertook the first major excavation work under the high-altar ; the architect uncovered a series of sarcophagus, but we do not know what happened to the pieces discovered.

Almost one century later, exploration began once again with a more scientific perspective. Between 1953 and 1976, Édouard Salin et Michel Fleury excavated more than 60 tombs. In 1974, the chief architect A.-J. Donzet protected unfinished excavation work by installing a grid and by highlighting the remnants that remained around the grave of Denis. Remnants belonging to several periods coexist on this excavation site.

Reused sculpted blocks were found in the foundations of the building prior to the basilica. A frieze featuring shields (crescent-shaped shields) decorates them ; it could have belonged to the mausoleum of a gallo-roman military man built, more than likely in the 3rd century, in an area relatively close to the basilica. 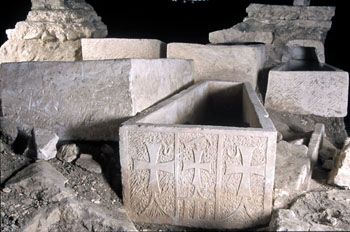 However, the true story of Saint-Denis began with Denis, evangelizer of the Parisii, described by Grégoire de Tours as one of the seven missionary bishops of Gaule ; towards 250, he was said to have suffered martyrdom in Paris during perscution of the christians. An empty tomb, still visible in the heart of the archaelogical crypt, corresponds to the Saint’s grave. In the cemetery of the 4th century which grew up around this burial place, the bodies were laid in wooden coffins or stone sarcophagus many of which were used as coverplates for roman wall-coverings. One of these tombs contained a cruciform fibula charateristic of the apparel of dignitaries at the end of gallo-roman Antiquity. In a place close to the cemetary a workshop produced bone pins.

The time scale between these ancient tombs and the former building (a construction 9m wide inside by more than 20m in length) remains controversial. In the Vie de sainte Geneviève, written towards 520, there is the question of a basilica being built towards 451-459 by this Parisian aristocrate, now the Patron saint of Paris. The shrine, placed under the protection of Saint-Denis, gave rise to a pilgrimage. The surge in visitors prompted the constructors of the new Carolingian basilica to bestow the apse, still visible today, with a crypt allowing worshippers to go down into the oratory situated below the high-altar, to pray in front of the venerated relics.