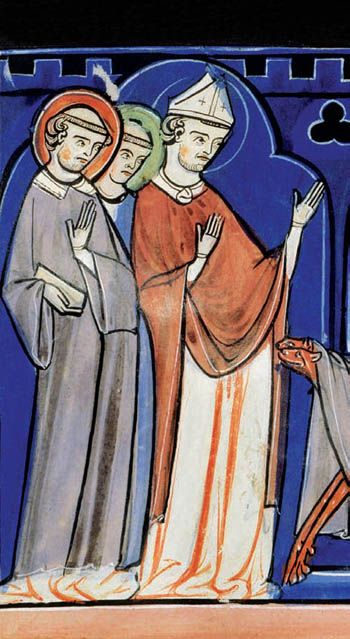 Tutelary Saint of the Cathedral Basilica of Saint-Denis, Denis remains a somewhat unknown charater. Sent by the Pope to evangelize Gaul, Denis was thought to be the first Bishop of Paris. He was probably beheaded during the second century. Many legendary texts evoke his martyrdom. What do we know of the character of Denis? Did he live in the first or third century of our era?

Denis and his biographers

The story of Saint Denis is known thanks to many ancient texts. The tale of his life and of his passion (martyrdom narrative) was written and rewritten throughout the Middle-Ages by many successive biographers, who gradually transformed history into legend (fig.1). Early versions present Saint Denis as the first bishop of Paris but do not match the era in which he lived. These contradictions stirred up controversy for centuries…

According to the oldest Passion, written around 500, Denis was sent from Rome to Gaul as a missionary bishop by Pope Saint Clement, successor to the Apostle Peter, who was in function from 92 to 101. He arrived in Paris with two disciples, Rusticus and Éleutherius (fig.2), Denis built the first cathedral, preached to the people (fig.3 and 4) and converted them to Christianity. In those times of persecution of Christians, the Roman authorities rapidly noticed his action. Subject to hostile questioning, Denis and his companions declared themselves Christians and  were put to death, beheaded by the sword of the executioner. To prevent their corpses from being thrown into the Seine, a pagan Roman aristocrat named Catulla, decided to sneak them away and bury them on her property. Later, Christians decided to build a basilica over his tomb. The foundations can still be found under the ground of the present Cathedral Basilica of Saint-Denis. However, according to archaeologists, they do not date from the first century but from the late fourth century…

Around 500, worship of Denis was at its highest. The Basilica was used as a burial place, as demonstrated by the evidence of archaeological findings. Since the end of the fourth century, many aristocrats were buried in the building or outside, in the immediate vicinity of the place of worship, convinced that the burial ad Sanctus close to the saints would ensure them eternal salvation… Around 520, the biographer of St. Genevieve of Paris attributes her with the initiative of founding a new basilica at St. Denis. At the end of the sixth century, the writings of Saint Gregory of Tours, gave credit to the story of Denis but he preferred to situate the narrative two centuries later, in the third century, under the Emperor Decius (249-251), which seems more credible historically. However, narratives dating from then continue to date the martyr back to the first century during the reign of the Roman Emperor Domitian (81-96). The link thus established between St. Denis and the apostle Peter via St. Clement of Rome allowed the Parisian Episcopal polity to claim apostolicity, and share a direct link with the apostles of Christ (fig.5 and center).

Before the French revolution, the Kings and Queens were buried in the Cathedral Basilica of Saint Denis, the town named after him.