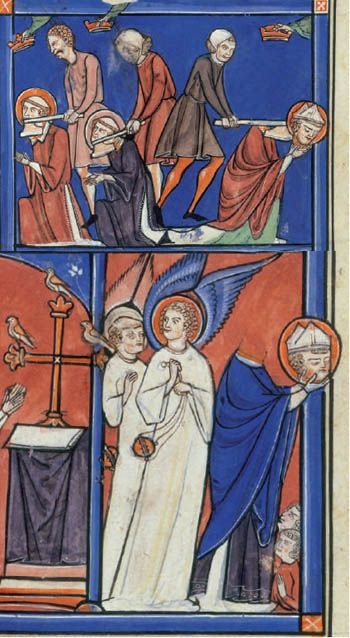 Before dying decapitated, Denis and his companions were said to have suffered terribly. These tortures inspired authors to produce texts and images.

All preserved narratives are unanimous in affirming that saint Denis and his companions Rustique et Éleuthère were beheaded (fig.1). Previous descriptions do not give much detail about the « various tortures » inflicted upon the three men. From the 9th century on, biographies were no longer satisified with this off-handed reference. In order to feed the worshippers imagination, authors added in a little more detail about the tortures endured by their heros. Circumstances of his martyrdom could be observed in genuine minature representations. It was the case for example in "manuscrit de la Vie de saint Denis - 13th century", here represented (fig.2, in the centre), that shows thirty miniatures dedicated to the life and torment of Denis. These images perfectly reflect the text illustrated. The blue and red background recall the beauty of the stained-glass window from the same period.

The imagination of abbot Hilduin

In 835, abbot Hilduin of Saint-Denis was the first to provide a series of new information, for example the name of the prefect who supposedly interrogated the three men, a certain Fescennius Sisinnius. In the course of the interrogation, a Roman aristocrat called Larcia accused Denis of being a magician. Just as quickly, Denis was stripped and lashed in front of his companions Rustique et Éleuthère, who were soon to endure a similar treatment (fig.3). According to Hilduin, Denis was then laid out naked upon a grill, and left to the mercy of wild starving animals (fig.4), thrown into a furnace and finally hung up on a cross, but he rose above all these ordeals thanks to the power of prayer. His companions, subject to the same torments, survived them in the same way. Subsequently, while saint Denis was celebrating a mass in his prison, Christ supposedly appeared along with a multitude of angels and offered him the blessed body of Christ with his own hands. Finally, and after a new beating, the prefect ordered the three men to be beheaded.

All subsequent versions of the Passion of Denis included the information provided by Hilduin. The only variant referred to later concerned the weapons used by the executioners for the beheading : the sword for hilduin, the axe for previous authors. At the end of the 13th century, the same story was brought up once again, in summary form, by the dominican Jacques de Voragine in his golden legend, which was translated into every language and was to become one of the best-sellers in the Medieval and Modern West. The history of Denis always told the same story since the 9th century. It remained identical with the same discription of the different tortures endured by the three saints, in different works from the modern era. It also inspired famous artists, such as Pierre II Mignard (fig.6) or Léon Bonnat, whose painting 1874-1888 (fig.5), continues to adorn the Pantheon today.