The life of St Denis, an essential figure from the second half of the third century, was enriched by a series of legends from the fifth to the 16th century. Legends that were written up mostly by the monks in the abbey in the shadow of his tomb, made this site a place of pilgrimage, drew devotion from Frankish princes and after from the different royal dynasties. According to last historical research, St Denis was said to have been martyred by the Romans in a field somewhere in the north of Paris, in the second half of the third century. He was buried in a cemetery on the site of Catolacus, the former name of the city of Saint-Denis, right where the building stands today. Devotion of him was officially certified in the fifth century by the building of a church over his tomb. Around 600 years after the death of this saint, a text by abbot Hilduin consolidated this legend including the most famous episode that shows the martyr carrying his head from the hill of Montmartre to Saint-Denis. 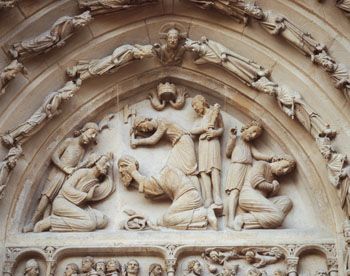 Detail on Valois portal, representation of the beheading of Denis. P.Lemaître © CMN