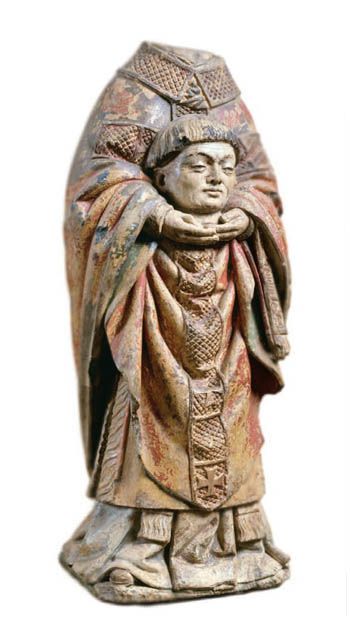 In iconography, saint Denis is clearly recognizable with his head in his arms. Where did this cephalophore motif come from ?

From the Middle Ages, artists did everything they could to make saints recognised by the general public. It was appropriate thus for each saint to be given one or more attribute to distinguish one from the other. We can see thus saint Peter with his keys, saint Jérôme with his lion, saint Antoine with his pig ; as for saint Denis, we recognize him for his bishop garb, but especially because he is a “cephalophore” saint, a saint that holds his head in his hands (fig.1 , center, 2, 3, 4, 5, center, and 6). Denis is not however the most famous headless saint in history. Saint John the Baptist is better known, his decaptitated head was brought on a tray to Salome, daughter-in-law of king Herod the Great ; a head that many churches claim to have in their possession. But John the Baptist never actually held his own head in his hands, contrary to Denis. Cephalophory thus became the attribut, par excellence, of saint Denis of Paris.

Why carry the head ?

The first descriptive texts relative to saint Denis do not speak about cephalophory. This theme appeared for the first time only in the second version of the Passion, written before the end of the 7th century. The author depicts Denis, his head fallen, standing up and taking his head in his arms and walking the distance that separated him from his desired place of burial. While this astonishing story is presented like a miracle, it does respond to a specific purpose : the author wants to demonstrate that Denis chose his own grave site, in the (future) basilica of saint-Denis, and there was no question of moving his body. Along with his extraordinary character, the story of a Denis cephalophore allowed the monks in Saint-Denis to state clearly that they were the legitimate guardians of the remains of Denis since that is what the saint wanted. (fig.6).

Who was the first cephalophore saint ?

The history of a saint carrying his head does not begin with the worship of saint Denis : the legend first appeared in the 7th century. However, other texts dating from the same period attribute the same characteristic to other saints. It was the case, for example, of saint Just de Beauvais, a long time considered to be the first cephalophore saint in history. But it was probably the Passion of Denis that inspired these texts and not the contrary : the success of his worship was so confirmed at Merovingian times that it could easily have served as a model. However, the idea that the disciples of Denis, Rustique and Éleuthère also carried their heads is written nowhere. We can ask ourselves why some artists represented the three of them together in the posture of cephalophore saints…(fig.7).