The Church's Adornment: the Stained-Glass Windows 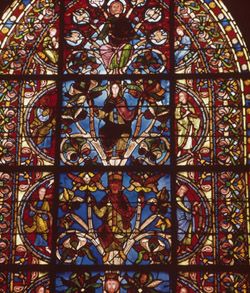 Of the 12th-century stained glass all that remains in Saint-Denis are five windows and a few elements removed in 1997 for restoration and currently replaced by photographic films.

In the 12th century, the services of a master stained-glass maker were retained for the maintenance of the windows. This was extremely rare. The stained-glass windows apparently cost more than the stone building itself. The subjects depicted on them were rich, complex and essentially meant for erudite monks.

The major themes of the 12th-century west façade, which presents the Old Testament as the prefiguration of the New Testament, culminate in the window illustrating the life of Moses and in the one abbot Suger called the anagogic window, meaning the one ‘leading up’. The Lady chapel features the theme of the Jesse Tree, which remained famous throughout the Middle Ages. This simplified genealogy of Jesus is the one found at the beginning of the Gospel according to Saint Matthew.

Commissioned by architects Debret and Viollet-le-Duc, the stained-glass windows on the upper parts of the building were created in the 19th century. 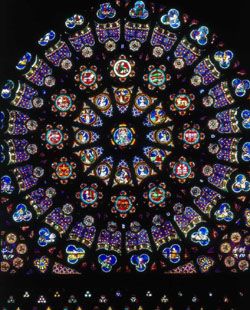 The stained-glass in the upper pats of the building are XIXth century creations produced on the orders of the architects Debret and Viollet-le-Duc. The medieval glass of the upper windows had been destroyed during the Revolution in order to recover the lead. In the upper parts of the choir, the windows tell the story of Saint Denis and several episodes in the history of the Basilica. In the nave, the long gallery of kings and queens ends in two huge rose windows. The South Rose is a stone structure of over 14 metres in diameter and said to have been a model for the one in Notre Dame in Paris. The veritable wheel of light depicts, around the central figure of God blessing some angels, the twelve signs of the Zodiac representing the course of the sun and 24 agricultural tasks hat take place during the year. The South Rose has been renewed in 2020.

Coloured glass, a very rare commodity in medieval times, is accentuated in the light. Saint Bernard compared it to the Virgin Mary. Light passes through it without destroying it, just as the Virgin gave life to Jesus while remaining pure. This comparison demonstrates much of the interest shown in stained-glass. Its role in terms of instruction in theology aimed at a largely illiterate population combines with the spiritual wonderment created by thousands of small patches of coloured light. Together, the stained-glass windows contrive to bestow on the building the image of a fabulous city to be compared with the heavenly Jerusalem.

In the 12th century, when the abbey-church was being rebuilt, the glass stained painters created a cobalt glass: "the blue of Saint-Denis" or "the blue Suger". This technique was to travel from construction site to construction site and was used in Chartres and Le Mans. It became to be known as "the blue of Chartres" and "the blue of le Mans". This colour blue was to be seen in several stained glass windows in the second half of the twelve century and the beginning of the 13th century. For more information, you can consult the book, Bleu : histoire d’une couleur by Pastoureau.