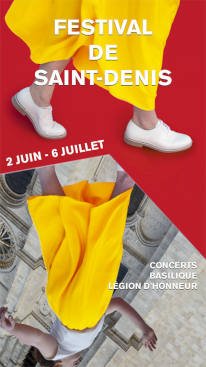 The Saint-Denis Festival has existed for 50 years. Every year in June the Basilica of Saint Denis hosts symphonic concerts and choirs reviving the times of the kings of France with classical music.

Gradually, the program has expanded to other musical fields: Baroque music with Jean-Claude Malgoire, Marc Minkowski ; and recently to the Lyrical Talents of Christophe Rousset, the exalted passion of world-music with Giovanna Marini, Hughes De Courson, Corsican polyphonies with A Filetta, contemporary music with John Adams or Arvo Pärt, as well as other artistic forms with well-known personalities such as Philippe Decouflé, Bob Wilson, Peter Sellars...