In 1974, the La Villette abattoirs, situated where Paris’ XIXth arrondissement and the department of Seine-Saint-Denis meet was shut down. In 1979, the Etablissement Public du Parc de la Villette was set up and launched its major project for the rehabilitation and development of 55 hectares of industrial wasteland with three declared goals:
- Building a major architectural complex devoted solely to music
- Establishing a national museum of science and technology
- Creating an urban park dedicated to culture and open to all

Today, this unique complex offers a blend of nature and architecture, of leisure activities and culture. The arts and the sciences rub shoulders in buildings whose architecture is nothing short of spectacular.

In creating the Parc de la Villette, Bernard TSCHUMI turned the largest area of open greenery in Paris into an innovative urban park reconciling the town-dweller and its surroundings.

The la Villette complex is distinctive in being home to a large number of public, private and voluntary amenities, marking it out as the major venue for culture, art, science and music.

In addition to all the exhibitions, circuses, festivals and children’s workshops offered by the Etablissement Public du Parc de la Villette, the complex hosts numerous other events during the year. The Géode, where giant-screen films are shown, has screenings all year round with a new film on the bill every three months (closed since 2018). The Cité des Sciences et de l'Industrie, one of Europe’s greatest science museums, plays host to numerous exhibitions and talks aimed at both professional scientists and the large public, Junior Spaces 2 to 7 and 5 to 12 years...

With its 250 concerts yearly, its resources library, its rich and varied educational programme and its museum, the Cité de la Musique (Philharmonie de Paris) is a centre with a national and international reputation. Finally, there are also other venues staging performances and events to add even more variety to what the Park has to offer, including the Trabendo (concert), the Zénith (concert), the Cabaret Sauvage (concert) or espace Chapiteaux.

If you are visiting with children, do not miss free outdoor games at Jardin des dunes et des vents, or the Dragon garden playground. You can also discover Vill'Up a city mall open everyday.

Enter the Argonaute, a submarine located near the Cité des Sciences, the Geode and the Canal de l'Ourcq.

At nightfall, the Cabaret Sauvage lights up for eclectic evenings and concerts: PJ Harvey, Arno, the Wampas... have performed there.

Small venue located a few steps from the Zenith of Paris where many artists have played: The Rolling Stones, Arctic Monkeys, Manu Chao, Muse...

To discover in Paris La Villette 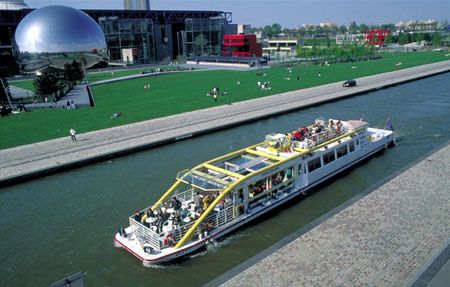 The key stages in the building of the La Villette complex

How to go to La Villette ? 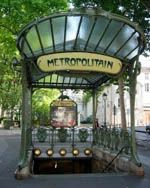 Lots of paying car parks are available: under the Cité de la Musique or near the Museum of Science and Industry.

There are various ways of transport to go to the Villette: subway, bus, car. We recommend that you take the public transport. Two possible entrances, either the Museum of Science and Industry, or by the Cité de la Musique.