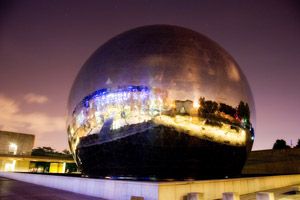 The GEODE is currently closed.

"Inaugurated 37 years ago, the Geode, located in the Parc de la Villette next to the Cité des sciences et de l'industrie, closed its doors on Friday, November 30, 2018 for work. ."

Within the Parc de la Villette, the Géode is many ways a remarkable movie theater:  it is a gigantic steel sphere of 36 meters in diameter whose outer envelope reflects the Cité des sciences, the sky and the park of la Villette. The Géode goes way beyond the maximum field of vision. The hemispherical movie theater room which was inaugurated on May 6, 1985 by the Architect Adrien Fainsilber and was entirely renovated in 1998, occupies the upper part of the spherical building.

The screen, which is one of the largest screen in the world (over 100m²) covers almost the entire room. The room is tilted at 27° to the horizon and the screen at 30°. This position give the spectator the feeling of being in the film.

The Geode has been closed since the end of 2018 and will reopen shortly to discover this amazing new site.

Address: 26 avenue Corentin Cariou 75019, Paris ( behind the cité des sciences et de l'industrie or starting from la Grande halle de la Villette by crossing the park and the bridge that goes over the Canal de l'Ourcq)

How to get there

The Geode and its films in a few words 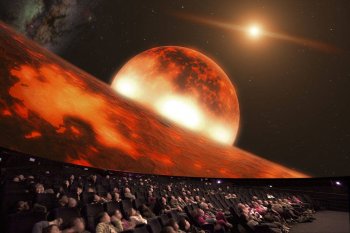 The Omnimax process gave an exceptional optical effect to the show and relied on a different projection material than the classic cinema. The image projected on the screen was 10 times bigger than the one of the 35 mn. It exceeded the maximum field of human binocular vision which is 120° horizontally and 104° vertically. The sound system, spatialized on the whole hemisphere, with a sound power of 21 000 Watts, optimized the impact of the image.

From 1995 to the end of 1998, the production team produced 12 to 15 movies per year, in order to meet the development of theater rooms. At the beginning of the 80s, only about 30 movies had been shot, at an average rate of 4 per year- 230 movies were produced. Most of the first movies shot for the giant screens were short films.

On June 26, 2001, in association with Les Productions Dussart, La Géode co-produced Origine Océan, a film about the origins of life in the ocean. Directed by Gérald Calderon, this film was a great success at the Géode, with more than 90,000 spectators at the end of September.

With an extraordinary cinematographic landscape, discover the North-East of Paris and Seine-Saint-Denis through original itineraries. These tours will be an opportunity to follow the major filming locations and emblematic films made in the area.