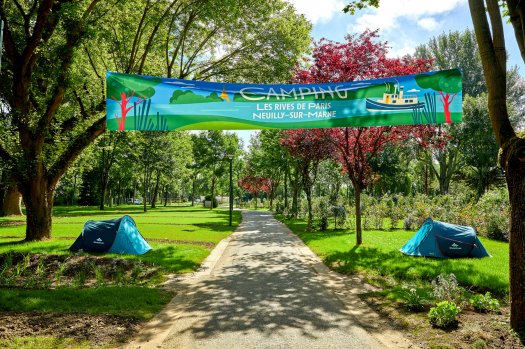 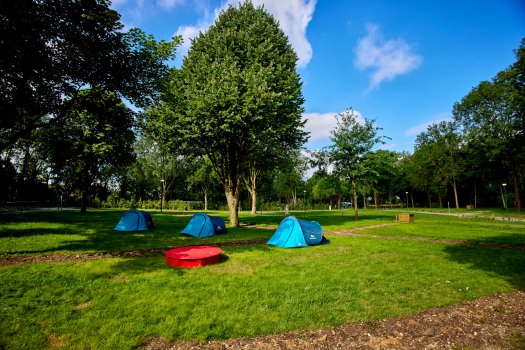 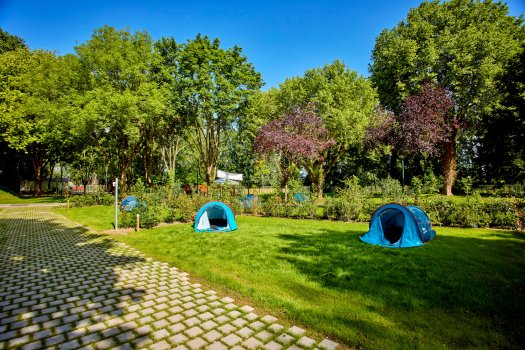 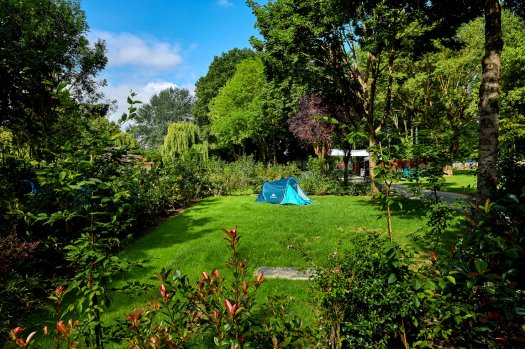 Between the Marne and the Chelles canal, the camping-caravanning Les rives de Paris invites you to stay out in the open and sleep under the stars with your family and friends. The wooded setting and the tranquility of this site in the Parisian region will allow you to appreciate the charm of the eastern Parisian outskirt, while being close to the heart of Paris and Disneyland Paris.Cross the bridge and its lock...and you'll arrive at the campsite near the river Marne.

The campsite of Neuilly sur Marne opened on June 11th , 2022 after being under construction for months. In 2023/2024, about twenty Tiny Houses will be available for rent.

From the beginning of spring to autumn, the municipal camping site of Les rives de Paris welcomes you in its bucolic, country-like site near the nautical base of Neuilly-sur-Marne. You can also stay there to attend an event at the Stade de France, in Saint-Denis by taking the A1 freeway.

The Rives de Paris campsite is the only campsite in the Ile-de-France region that has service terminals and  outlets dedicated to camper vans.

The campsite is very close to the park of the Haute-Ile which has games for children and pleasant trails where you can walk during the day. You can also walk or cycle along the Chelles canal. There is also an equestrian club right next to the campsite where your children can learn how to mount a horse or a poney during an afternoon.

Access to the Haute-Ile park:  from the campsite, just walk along the riverbank to reach the gates of the park and there you can choose between two paths. Turn to the right for a quiet alley that will lead you to the meadow and "wet" areas. Turn left on the alley (central axis) which is the most direct way to the playground, the Maison du Parc (which takes you over the bridge over the canal).
The park is not huge, but it takes about 30 minutes to walk through the central alley from one end to the other, so don't forget to check the timetable.

The park is crossed by large alleys that allow children to access the play area "knights and trolls" easily. A majestic castle allows children to climb and to go down either by the slides or the nets.
Picnic tables are set up, toilets are located near the playground. The main paths are good for biking, rollerblading and skating; which is ideal when children don't want to walk!
The departmental park of Haute-Ile has a protected area for fauna and flora but it also has a space dedicated to archaeology: the archaeosite. On some weekends, free activities are organized by the Haute-Ile park house on the theme of archaeology, hunter-gatherers...

The municipal camping site of Les rives de Paris in Neuilly-sur-Marne is open from March to Ocotber-November every year.
We advise you book your spot in advance for events such as the SIAE (aeronautics show), the VDL (leisure vehicle show ) at Le Bourget and other big events as the camping might be crowded.

Rental rates at the Les Rives de Paris campsite: call the campsite or consult the website of the campsite in Neuilly sur Marne (in French).

Go to the Place Stalingrad (a short walk from the campsite) to admire Neuilly's fireworks which start on July 13th every year. Between the ball and the fireworks, you'll have an eventful night on the place Stalingrad! Cross the lock bridge and go along the banks to the main square, a meeting place for bowlers during the day, which turns into a dance floor for our national holiday.

Every year the municipality of Neuilly-sur-Marne organizes "Neuilly l'été" a summer festival. During this festival you'll be able to relax on deckchairs and hide from the sun with parasols while the kids take part in animations and games . You can also go canoeing on the Marne. Neuilly l'été takes place in July mostly near the campsite and in August in the 33 hectare park (croissant vert).

From the Rives de Paris campsite you are in the axis to go to the very famous amusement park: Disneyland Paris! You just have to take the line A of the RER from Neuilly-Plaisance until  Marne-la-Vallée/Chessy, then you'll have a 2 minute walk to get to the gates of the Parks.

The only campsite in Seine-Saint-Denis offers "bare" pitches for family tents or tents for 2/3 people. The pitches are located at the beginning of the campsite near the toilets but also at the back of the campsite for those who want to be immersed and have the full "wild camping" experience and seeking quietness. 108 pitches (50 to 70 m²).

The spots dedicated to caravans (and camper vans) are bordered by hedges with 10 Amp electrical terminals (make sure you have large extension cords and adapters to HO7RNF standards).

Pitches : water and electricity supply
Les rives de Paris is a municipal campsite; you must therefore have the appropriate equipment to connect to the common electrical terminals and water containers.
Electricity terminals on the pitches: outlets are in accordance with the European norms HO7RNF, so you need to bring an adapter if necessary. Remember to bring large extension cords to connect to the electrical terminal.

Service: a service is the use of the Euros-Relais terminal.
This is a toilet block equipped with a multi-functional service terminal allowing motor homes to empty their grey water (kitchen and shower room) and their black water (WC) and to fill up with water. It also allows a short term electrical recharge.

Cruise from the Saint-Martin canal to the Seine : best of both worlds
Parisian Guinguette cruise on the Seine river
The project house of the athletes' village in Saint-Ouen
The Japanese culture in Paris
Seine-Saint-Denis Tourisme
140, avenue Jean Lolive
93695 Pantin Cedex
Tél. 01 49 15 98 98