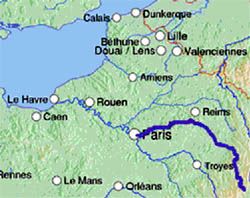 The Marne (East of the Paris Basin) is the longest river in France: 525 kilometers (326 miles). It takes its source at Langres and Baslesme-sur-Marne and flows into the Seine at Charenton-le-Pont, Alfortville and Ivry-sur-Seine (Val-de-Marne).

With an oceanic influence and a pluvial regime, its maximal flow is observed in January and its minimal flow in August. The Marne is navigable over 183 km (113 miles) and is canalized over a distance of 327 km (203 miles). Locks (approximately twenty) are 45 m (147 ft) by 7.80 m (23 ft) at least and widen on arriving at Charenton.

Under the reign of Napoleon III (from 1848 to 1862) the Marne was converted for canal transport between Neuilly-sur-Marne (Seine-Saint-Denis) and Vaires-sur Marne (Seine-et-Marne) to avoid difficult routes, time and money, to reach the Seine at Charenton: the Chelles canal.

The bridge of ‘Goujonnette’ on the canal connected Vaires to Neuilly-sur-Marne and horses pulled a barge. It was a maintained towpath (nothing separated the path from the water - trees and bushes gave way to horses and guides). The river became a more tranquil place with the emergence of boats, open-air dance halls (French Guinguettes) and the arrival of painters!

The "bar de la Marine" situated on the banks of the Marne is a modest building which was in fact a former open-air dance hall built by 1880.

1892 - The 1st bridge was created to cross the Marne and pass between Neuilly-sur-Marne and Noisy-le-Grand: it was the end of boatmen and ferryboats.

The natural site of the Haute-Ile park is protected. This park is rich in fauna and flora, in environmental history and archaeology.

The former Bains-Douches (1930)... a beautiful building which benefitted from the water plant (on the right bank of Marne River). A rural Village, Noisy experienced new accelerated growth with the construction of the tramway, at the beginning of the twentieth century: the setting up of Guinguettes along the Marne, the arrival of artists such as the songwriter Claude Terrasse, the painter Pierre Bonnard or the comedian Michel Simon).

Discover the cycle trail via Marne's guinguettes, from Noisy-le-Grand to Joinville le Pont

Since the Neolithic era, Gournay is occupied by Man certainly thanks to the important natural ford of the Marne River; furthermore, traces of a Gallo-Roman village (tanners or dyers) were discovered. The town of Gournay-sur-Marne has always been considered as an important passing point on the Marne between Lagny and Charenton. The king and nobles fought for its possession, either to defend Paris, or to attack it. In late nineteenth century, Guinguettes were set up along the Marne and then a beach, tents and dance podiums were added in 1930, to add to the charms of the town of Gournay. It was in 1936 that a building in the shape of an ocean liner was constructed... In 1960, the banks became deserted because of pollution. but now, ramblers, restaurants and Guinguettes are once more in the spotlight!

"Neuilly" is the derivative of novale/is which designates the clearing around the banks of the Marne which bears a close resemblance to the word lanin novus (new). The word "Plaisance" comes from Château de Plaisance.
Three railways tracks linked the plasterworks of the Plateau of Avron (gypsum) to the Marne from where long fluvial convoys departed. The "Voie Lamarque", implanted on the former railway tracks (2 kilometres long) became the "greenway" completely dedicated for pedestrian use and from which the urban park of 31 hectares could be reached from the river.

You're looking for a calm day along the canal? See our description of the Marne riverbanks in Nogent-sur-Marne on our new internet site.

Every summer, the company Passeurs de Marne and Passeurs de Rive organize cruises on the Marne in proximity of Neuilly-sur-Marne, Noisy-le-Grand and Gournay-sur-Marne.

The banks of Marne attract many painters. Those who count among the most famous: Corot, Cézanne, Pissarro, le Douanier Rousseau, Eugène Carrière...

Check out our summer cruises on the Marne River