Must see and small museums in and around Paris 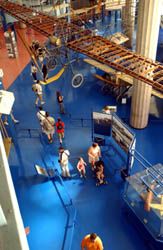 The French capital has musems for all kinds of art lovers. And so does Seine-saint-Denis, the department has more than a dozen of unusual and interesting museums that are worth going out of your way to visit, to name a few : The Air and Space Museum in Le Bourget, the Cité des Sciences and the Philarmonie de Paris both at la Villette.

A visit to the Art and History Museum in Saint-Denis

The former Carmelite convent of Saint Denis has been housing the Museum of Art and History since 1981. The museum owes its originality to five original collections which consist of : the Carmel, mediaeval archeology, the former Hotel-Dieu, the history of Paris of 1871 and the Paul Eluard collection. The Carmelite monastery was founded in 1625 and Louise de France (1770-1787), daughter of the French King Louis XV, stayed here.

Napoleon transformed the old abbey of Saint Denis, founded in the seventh century and completed in the reign of Louis XV into the Maison d’Education de la Legion D’Honneur - House of Education for young girls. The new building built in the late 1980s accommodates about 500 students. Its architectural complex maintains all the old prestigious buildings of the abbey and vast park located in the heart of the medieval town of Saint Denis.

Railroad history started in the twentieth century. When entering the Rosny-sous-bois regional railway museum, visitors are immediately immersed in the atmosphere of a late century railway station decor. The space devoted to the past and future narrates the epic story of railways. Typical railway items and objects forming part of the railway system and relating the story of rail transport in France and its impact on todays society are found there. It is also home to collections of transport artifacts. An archive and library collection, both written and pictorial records of former transport documents can also be viewed. An old signal box from the Paris-Clermont Ferrand line was dismantled and rebuilt within the museum.

Established in 1937, the Histoire Vivante Museum was inaugurated on March 25th 1939 for the 150th anniversary of the French Revolution. The museum’s permanent collections are: from the French Revolution to the 1960s, Jaurès’ manuscripts, tracts by the French Resistance Party during the war, tracts by the French Communist Party, engraving reproductions, photographs, objects, prints, postcards and posters. Researchers have access to these documents which are available for their upcoming papers. The museum is located in Montreuil and hosts many temporary exhibitions as well.

This small Montreuil horticultural museum unique in France, showcases and relates the incredible adventures of the huge potential of horticulture that was given a boost from the eighteenth to the twentieth century at the gates of Paris. The espalier peach-tree growing culture (fruit on walls), fruit marking (imprints remain on fruit after ripening) including many objects remind us of a time when fruit and tree plantations enabled the town of Montreuil to get its economy started in horticulture and arboriculture.

Located in a prosperous 20th century house, the museum of the History of Rosny is devoted to local traditions. Hundreds of objects and documents can be viewed. The village was known as Rodoniacum in the early centuries and is since called Rosny sous Bois. The museum relates the history of the city, its people and its traditions from the past to today. It covers an entire area, more than the town itself, because all the history of the territory is gathered here. The museum is only open on Saturdays from 2pm to 6pm, the other days of the week you have to book a visit with the president of the museum.

The Drancy Memorial Camp located in front of the La Muette housing complex  is a monument dedicated to the memorial of deportees and a witness-train car. An exhibition which traces the history of deportation can be viewed in this witness-train car. The internment camp, installed in pre-existing 1935 buildings was in service from 1941 to 1944. In 2012, the Shoah Memorial, a new place dedicated to history and education was inaugurated in Drancy thanks to the support of the foundation for the Memory of the Shoah and the town hall administration of Drancy that offered the land to build the new remembrance building.

An invitation to discover an icon throughout the ages: the life of Eugene Carriere. Born in Gournay sur Marne, Eugene Carriere was an original artist. He was a great friend of Gauguin, Rodin and Clemenceau who appreciated his work. The museum collection includes original drawings, personal objects, old era photographs, old prints and engravings which trace his life through his creative work of art.

Do not miss the last ancient windmill in Seine-saint-Denis Sempin windmill. Built in 1738 was identically rebuilt with its original stones. It remains one of the few windmills in Paris Île-de-France which demonstrates grinding techniques following ancestral traditions. Its milling tools can be see non each on  of the three stories and will remind you of bygone days while reviving local memory.

The labour Museum Charles Peyre showcases the traditional tools used by workers in the north-east of Paris. Installed in the clock's building, last vestige of the seigniorial farm the site cover no less than 70 ancient jobs and skills separated in 5 fields: agriculture, forestry, the construction industry, craftsmen and women's jobs.

Located in the magnificent park of Sevran Park, the gunpowder museum traces the history of gunpowder. Housed in a building of the old factory and witness to the strategic importance of the site the museum is structured around spaces rich in discoveries: experimental laboratory, the boiler room, the mercury fulminate manufacturing machine, the tanks, packaging bottles..

The purpose of the Environment House located near the Paris CDG international airport is to promote community social issues: management of natural, native and historical culture and quality of life for the benefit of the public. It includes the administrative hub of Airlines and aircraft navigation Companies as well as a cluster-based territories pole. The environment House also provides guided tours of the airport’s environmental impact which consist of a presentation of the Airport platform hub and a coach visit of the backstage of the Paris Charles de Gaules International airport. Enjoy the tour and the full story of what is the territories legacy to the airport comfortably seated in a special air-conditioned coach. Discover the 35 kilometers backstage of the biggest airport in Europe.

Small museum in a Psychiatric hospital

Do you want to know what SERHEP means ? "Société d’Etudes et de Recherches Historiques en Psychiatrie”. visit this small museum which is located in the Psychiatric hospital of Ville-Evrard in Neuilly-sur-Marne.

Museums currently opened on 1st May to the public

Christofle Museum : Christofle factory in Saint Denis once hosted the Bouilhet Christofle museum. The factory is no longer active. It featured a presentation devoted to silverware, tools, library and archives. It related the history of the company since the 1830s and evoked the fact of the ever-evolving decorative arts, tableware and traditions including silversmith techniques, skills and silver trading from the nineteenth and twentieth century.

Art Galleries and more in the Parisian region

Art and History Museum of Psychiatry