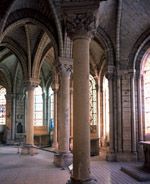 For centuries, the Saint-Denis royal abbey illuminated the artistic, political and spiritual history of the Frankish world. The abbey church was designated a basilica in Merovingian times. Starting in the 4th century, the word basilica was applied to churches whose floor plans were the same as those of Roman civic buildings used for trade and the administration of justice. Often erected outside cities and over the tomb of a saint, basilicas frequently led to the development of neighbourhoods or market towns, such as the city of Saint-Denis, which was built around the abbey and its economic potential.

The church stands on the site of a Gallo-Roman cemetery, the resting place of Saint Denis, who was martyred around 250. In addition to a Carolingian crypt, part of the building consecrated by Charlemagne in 775, it retains vestiges of two structures that played a pivotal role in the development of religious architecture: Suger’s chevet, a veritable hymn to light and the manifesto of the nascent Gothic art; and the part that was rebuilt in Saint Louis’ time, whose vast transept was designed to house royal tombs. 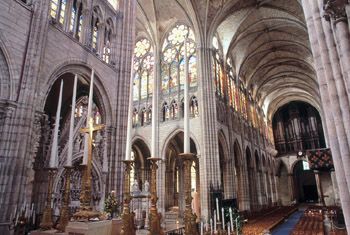 A place of memory, in the Middle Ages the Saint-Denis monastery linked its destiny to that of royalty, gradually asserting itself as the preferred resting place of royal dynasties, helped by the cult of Saint Denis. Forty-two kings, 32 queens, 63 princes and princesses and 10 nobles were laid to rest there. With over 70 recumbent figures and monumental tombs, the basilica’s royal necropolis constitutes the most important collection of funerary sculptures from the 12th to the 16th centuries.

Throughout history, sovereigns have sought legitimacy, which explains in part why they wanted to be laid to rest near Saint Denis’ relics. The king believed that, through the power of the holy martyr, he would gain power and protection during his lifetime, especially in battle, as well as direct access to Paradise. 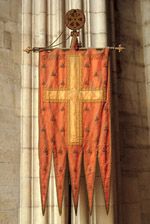 The rallying cry of the knights on the battlefield in the 12th and 13th centuries, inscribed on Saint-Denis’ famous oriflamme, a scarlet banner powdered with gold flames. ‘Montjoie saint Denis’ became the motto of the kingdom of France, which thus placed itself under the protection of Saint Denis, its patron saint. Systematically raised in wartime, the ensign was given to kings by the abbot on the altar of the holy martyrs. It was one of the major objects of the medieval epic around which early national sentiment began to unfold. A copy of the banner is kept at the basilica. 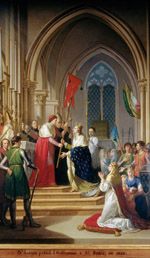 The Hundred Years War, the wars of religion and political unrest all contributed to the decline of the royal abbey of Saint-Denis, well before the Revolution precipitated it. In 1793, the revolutionaries attacked the symbols of the monarchy, exhumed remains and buried them in a common grave, but they preserved most of the funerary sculptures, to be used in the education of the people. In 1806, Napoleon I ordered the restoration of the building. Then Louis XVIII, renewing the abbey’s role as a necropolis, exhumed the remains in the common grave and placed them in a vault, in the basilica’s crypt. He also had the remains of Louis XVI and Marie-Antoinette transferred to the basilica. The restoration work continued throughout the 19th century, under the direction of two architects, Debret and Viollet-le-Duc, who took over in 1846. In 1966, the basilica became a cathedral, a designation derived from the word cathedra, the bishop’s seat.