The library in Saint Denis Abbey 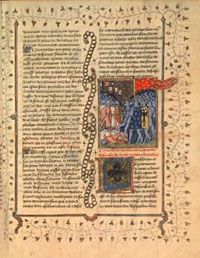 The role of the abbey was to maintain, preserve and share the memory of the reigning dynasty. At the request of St Louis, the Primate Monk translated, for the first time in French, a vast ensemble of texts, the first draft of the history of France. This collection of official chronicles of the kingdom developed until the 15th century, under the heading The Great Chronicles of France. By elaborating the texts favorable to the Monarchy, and by creating sculpted images of the kings, the Capetian dynasty associated their most distant origins of the French kingdom to those of their family.