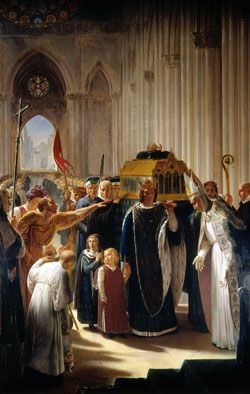 Louis IX (Saint Louis), who was canonized in 1297, was called a "superman" by the pope. A man of great faith, he was particularly attached to Saint-Denis. He continuously strengthened the Basilica’s role as a royal necropolis, in particular by commissioning, around 1263, an initial series of 16 recumbent figures. A recumbent figure is a sculpture depicting someone lying down. The word recumbent is derived from the Latin verb recumbere (to recline). Fourteen of those original sculptures have survived. They can be found in the arms of the transept, their original location, according to 18th-century engravings.

In the Middle Ages, the gilded silver tombs of Louis VIII and Philip Augustus, Saint Louis’ grandfather and the victor at Bouvines in 1214, had the places of honor at the centre of the crossing. This grouping was completed around 1280 by the addition of a magnificent silver-gilt tomb in honor of Saint Louis, ‘the most beautiful tomb in the world’, according to chronicler Guillaume de Nangis. All three of these monuments were destroyed during the Hundred Years War. 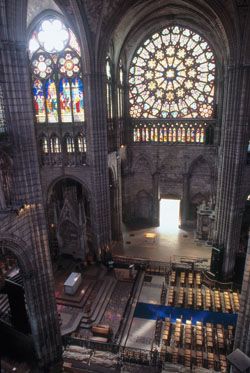 The medieval recumbent figures commissioned by Saint Louis are modelled on the column figures found on church portals. The sovereigns bear a crown and a sceptre. The idealized faces of 16 recumbent figures are majestic expressions of the royal function. Originally painted in bright colours, the figures, which are clothed in a 13th-century style, are not depicted dead; their eyes are open to the eternal light. Affirming a belief in the Resurrection, they are turned towards the east, towards the rising sun, the image of Christ whose return they await.

But the Capetians also had a political purpose in mind. They wanted the dynastic continuity that existed between the Merovingians, Carolingians and Capetians to be remembered, and they sought to achieve this through sculptural representation.

Sculptures of princes and kings initially housed elsewhere were also transferred to the monument in the mid-19th century: Clovis, Childebert, Fredegunda, Charles d’Anjou and the Dukes of Orleans.
The abbey’s role was to preserve and record the memory of the reigning dynasty, and to make that memory known through writing. At Saint Louis’ request, a monk named Primat translated a series of important texts into the French language for the first time, establishing a framework for the history of France. This collection of official kingdom chronicles was developed until the 15th century, under the title Grandes Chroniques de France. In the late Middle Ages, the monastery’s library was the most important in the kingdom.

<<  Dagobert's Tomb, and the Merovingian and Carolingian Kings  |  Royal Funerals  >>