The medieval statues, commissioned by St Louis, were built on the model of the column-statues that adorn the church doors. The reorganisation of the necropolis, initiated by the Capetian dynasty, prompted the discovery and transfer of the remains of the 16 monarchs, buried between the seventh and 12th centuries. Their bones were relocated and placed in caskets above which were laid 16 recumbent figures with idealized faces, majestic expressions of the royal function. Representation of these sculptures is relatively consistent. 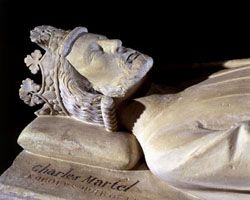 Stone tomb of Charles Martel. Although Mayor of the Palace, he was considered as ancestor of the great Carolingian dynasty. P.Lemaître © CMN

The number of recumbent statues commissioned by St Louis comes to 14. The sovereigns bear a crown and a sceptre. Originally painted in bright colours, the figures, which are clothed in 13th-century style, are not depicted dead ; their eyes are open to the eternal light. Affirming a belief in the Resurrection, they are turned towards the east, towards the rising sun, the image of Christ whose return they await. But the Capetians also had a political purpose in mind. They wanted the dynastic continuity that existed between the Merovingians, Carolingians and Capetiens to be remembered, and they sought to achieve this through sculptural representation.

More information on the recumbent statues of Saint-Denis.