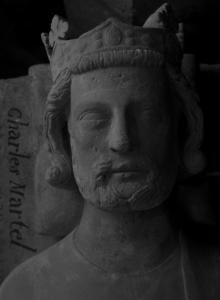 Even though he was simply the Palace Mayor, Charles Martel is depicted with a crown and a scepter. He was indeed considered by the Capetians as the ancestor of the great Carolingian dynasty. He was never blessed with the official title of king, even though he used his power and influences to govern the kingdom of France for over 20 years.