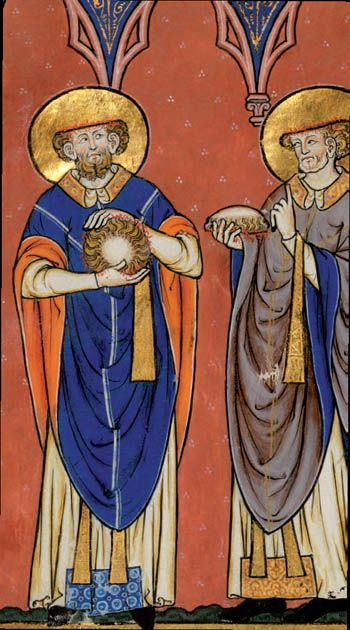 The relics of St Denis have a turbulent history. Throughout the centuries, they were the object of many attentions.

In theory, the bodies of the deceased were to rest in peace at the place they were buried. However, martyrs are not your average dead! In the Middle Ages, Christians allowed the bodies of saints to be fragmented, to be presented in different reliquaries or shrines, and transferred to other places unharmed (fig.7) for each part of their body was supposed to contain all their miraculous power. Fragments were allowed to be taken and given to other churches devoted to the saint in question, or to powerful groups for their acts of well-being. The influence of worship was often measured to the extent of the dispersion of these relics.

A chronical from the beginning of the 8th century, the « Liber Historiae Francorum », claims in small detail that King Clovis II (639-657), son of King Dagobert, retrieved one of St Denis’ arms at the instigation of the devil. This episode was developed a few centuries after by the author of a biography about Dagobert who explained that Clovis II had pilfered this relic out of pure greed and that he was immediately seized by an attack of madness. The saint took revenge! To redeem himself, the king then got the arm placed in a beautiful relic adorned with gold and precious stones (fig.8) and had it returned to the abbey. The illustration makes reference to a similar case with St Eustache.

In 1052, the body of St Denis found itself in the heart of an affaire d’Etat. Monks from the powerful monastery St Emmeran de Ratisbonne claimed that they did indeed possess the body and organised a big celebration in attendance of the emperor and the court of Germania. Reaction by the monks in Saint-Denis was not long in coming. The conflict took on such magnitude that the King of France, Henry 1st, was obliged to intervene and solemnly ordered the shrine to be opened in the presence of numerous bishops: all could then confirm that the body was that of St Denis (fig.9). In 1406, a new dispute arose this time between the monks in Saint-Denis and the canons from the cathedral in Paris: while the monks continue to insist they possess the whole body, the canons claim that in 1217 King Philippe Auguste delivered to them the top of the saint’s head. This conflict escalated to such an extent that it became the object of a trial at the Parliament in Paris in 1410. According to the canons, Denis did lose the top of his head before being beheaded, and this version can be seen in certain representations from the 13th century that show St Denis missing just the top of his head (fig.10, center) and not the classical decapitated St Denis (fig.12). Other saints, such as Nicaise de Reims (Fig.11), are represented the same way. Today, the relics of St Denis are conserved in a shrine placed in the upper choir in the basilica.

Figure 8 :
Vermeil reliquary , arm of St Eustache.
Board 1 featuring the treasure of St Denis, from the History of the royal abbey of Saint-Denis by Michel Félibien (1666-1719)
Cliché Yann Mambert