The tomb of Dagobert

Dagobert, king of France from 629 to 639, Merovingian dynasty. 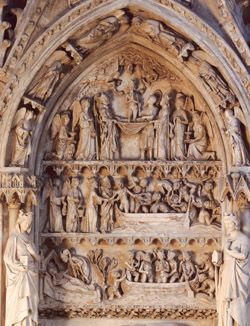 Dagobert is the first king buried in the Basilica in 639. He is considered to be the abbey’s founder.

The monks paid him homage in the XIIIth century by fashioning a tomb of remarkable dimensions now in its original position in the sanctuary. His funerary statue, lying on its left side, looks towards the location of the early tomb of St Denis.

Three carvings on the tomb tell the story of the vision of the hermit John. The king’s soul, depicted as a naked child wearing a crown, is carried off to Hell on account of his regrettable practice of disposing of the property of certain churches. But in the upper panel, St Denis, St Martin and St Maurice seize the soul from the hands of the demons and take it off to Heaven where it is granted entry to Paradise. This vision expresses Saint Denis’ and the abbey’s role as protector of the Capetian monarchy.