Desecration of the royal tombs

Since its construction at the beginning of the 13th century, the Cathedral Basilica of Saint-Denis has suffered a lot of damage. Damage from time but also from Man. The main destruction inside took place during the desecretation of the royal tombs by the revolutionaries of 1793.

Initial desecration of the tombs in the Basilica in 1793

In 1793, the National Convention ordered the destruction of all signs of feudalism, noble and royal tombs in all buildings in the Republic. On July 31st in 1793, Barère, before the National Convention, and using the pretext of recovering lead from the coffins, suggested attacking the « unclean ashes » of the tyrants in order to celebrate the first anniversary of the storming of the Tuileries on August 10th. The following day, by the decree of August 1st in 1793, it was decided that: "The tombs and mausoleums of the former kings, mounted in the Church of Saint Denis, in temples and in other places, across the entire Republic, will be destroyed on August 10th." 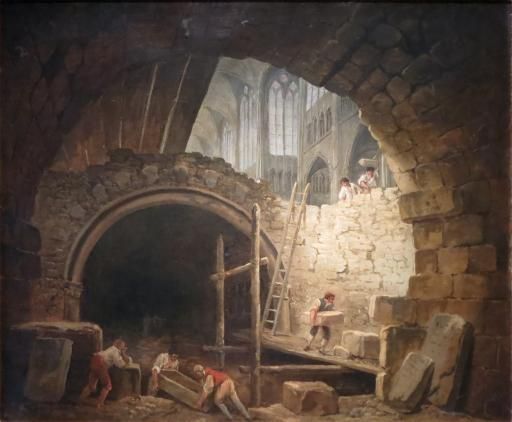 In Saint-Denis, desecration happened twice. First, between August 6th and 8th, the funerary monuments of the Merovingian and Carolingian kings were smashed to the ground. Then, on Saturday, October 12th, the laborers who had been chosen to do this job returned. The funerary monument of Turenne, marshal of France, killed by a cannonball in 1675 at the battle of Sasbach, had been erected in the Basilica in 1683. It was the first one to be destroyed. After Turenne’s coffin, the laborers hammered at the vault of the Bourbon gaining access by breaking through a wall. Under the surveillance of the skilled marble mason François-Joseph Scellier, several commissioners of the convention and delegates from the Commission of fine Arts, the laborers began by attacking Henri IV’s coffin. It was displayed upright in the Basilica for several days, in full view of curious passers-by.

It was two months later that, on Monday, October 14th in 1793, the desecration of the vault of the bourbon truly began. On opening the leaded coffin of Marie de Médicis, Henri IV’s second wife, some bones were found floating in muddy matter. Two or three laborers scooped them out with shovels to recover the lead. During this time, as was recounted later by an eye-witness, Henri-Martin Manteau (a friend of dom Druon, ex-rector of the abbey of Saint-Denis who had become archivist of this site), insults were thrown at the remains of the unfortunate queen whom they accused of having murdered her husband. Some among them pulled out the remaining tufts of her hair still attached to the skull and passed them around. The laborers then made their way over to the grave of Anne of Austria. In her casket they found a putrefied body wrapped in very thick and red fabric. It was the costume of the Third Order of Saint Francis. After that, it was the turn of Louis XIII and Louis XIV.

Once the stone or marble funerary monuments were removed or smashed to the ground, several bodies were found to be in a state of putrefaction or reduced to dust while others were perfectly preserved. A hollow grave was dug, the bodies wrenched out of their coffins and the remains of three generations of kings flung in there, to many shouts of joy. Onlookers wanted to keep a souvenir of this memorable day. Here and there they pulled out a tooth, moustache hair, a fingernail or tuft of hair. Frédéric Lewino and Gwendoline Dos Santos in their article on the desecration of the royal tombs of Saint-Denis, published on October 14th in 2012 on the internet site of Le Point, wrote that a certain Charles Brulay (receveur des domaines – collector of revenue in Saint-Denis in 1793) seized Dagobert’s jaw, a section of Saint Louis’ skull, the teeth of Henry III, Philippe Auguste’s hair and the leg of Catherine de' Medici !

Desecration continued on October 16th at 7 a.m. Twenty-one coffins were broken open that day and their occupants flung into the pit. According to Frédéric Lewino et Gwendoline Dos Santos, an eyewitness described the scene thus : "Most of the bodies were decaying. A foul-smelling, thick, black vapour was released, which they desperately tried to dispel with vinegar and powder that they had taken the precaution of burning, which did not prevent the workmen from feeling unwell and feverish but without consequences".

The crowds that gathered around the exhumations made it very difficult for the laborers to work. Also, the Municipal Council of Franciade, name given to the municipality of Saint-Denis durning the revolution, decided to close the Basilica to « people not involved in the work » but this decision was not implemented.

The royal remains were deposited in the basilica crypt

Bodies of more than 170 people (46 kings, 32 queens, 63 blood royals, 10 royal servants and two dozen abbots of Saint-Denis) were also thrown into two large pits (one for the Valois and the "first races", that is to say the previous dynasties, the other for the Bourbon) dug in the monks cemetery adjacent to the north of the Basilica, then, covered in quick lime and soil.

Under the Bourbon restauration (from 1815 to 1830) Louis XVIII retrieved the remains of his brother Louis XVI and of Marie-Antoinette at the Madeleine cemetery and returned them for burial in Saint-Denis during the course of a grandiose funerary feast in January 1815 (anniversay of the death of Louis XVI).Then, in 1817, after a week’s searching ordered by Louis XVIII, the workmen guided by the marble mason François-Joseph Scellier uncovered the monks cemetery graves. Due to quick lime the bodies could not be identified and the royal bones of Louis XVIII predecessors were gathered together on January 21st in 1817 and reburied in the crypt in the Basilica. They were placed in an ossuary, behind two marble plates bearing the names of the hundreds of members of successive royal dynasties.

<<  Louis XVIII and the return of the monarchy  |  Queens and Princesses  >>