Over the centuries, the construction of the basilica evolved around the tomb of St Denis. The various monuments erected on the site from the 5th to the 13th centuries – Carolingian church, Suger’s basilica and Saint Louis’ vast nave – were all considered innovative masterpieces in their time.

A rich and very influential Parisian noblewoman, Ste Geneviève most likely commissioned the first building in 475, which was 20 m long and 9 m wide, and of which foundation walls have survived. Because many aristocrats wanted to be buried near St Denis, the basilica was expanded in the 6th and 7th centuries. 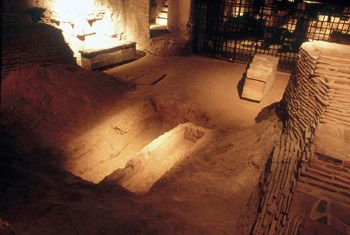 In the 8th century, upon his coronation, Pépin the Short decided to rebuild the church along the lines of the Roman buildings known as basilicas. The tomb and relics of St Denis and the two men martyred with him were kept in the basilica up until the 12th century. Today, in St Denis’ cavernous crypt, which guards the basilica’s most ancient history, a pit serves as a reminder of the location of the tomb and relics. This pit has been the centre of all the buildings erected on the site, from the first chapel (4th to 5th centuries) to the 13th-century abbey church.

In the crypt at Saint-Denis, people with a passion for the Romanesque will find one of the rare examples of this style in the Île-de-France. This space also features several storiated capitals depicting, among other things, the life of St Benedict, as well as foliated capitals. Being so massive, the crypt supported the new chevet created in 1140 by Saint-Denis’ famous abbot, Suger.