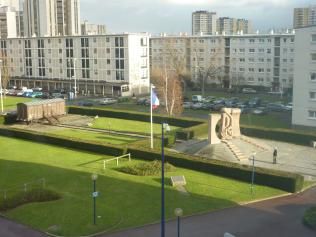 The « Cité de la Muette » in Drancy was built in the early 30’s at the request of Henri Sellier, founder and member of the board of the public housing company of Seine Department. This public housing program aimed to provide the widest possible number of people with good living conditions. It also had to contribute to break with the anarchic development of the suburbs. The new neighbourhood in Drancy had to include shops and other services. This project of affordable housing had been designed by two architects who belonged to the architectural Modern Movement : Eugene Beaudoin and Marcel Lods. The “Cité de la Muette” project had to answer to uncommon hygiene standards at that time and gave them the opportunity to use new standardised industrial manufacturing methods which gave it an international reputation.

Although it was designated as a garden city, the “Cité de la Muette” was the first “Grand ensemble” (so-called French large housing development). The architectural critic Maurice Rotival thought up this French expression in 1935 when this exemplary-considered program was being built. This model was duplicated everywhere in France after the Second World War. The project is made up of five highrise residential buildings joined with other comblike buildings and with one large “U” shaped building. However, the construction of the “Cité de la Muette” came up against the 30’s economic crisis. The project had not been completed but already built apartments were available for lease. But these “first Parisian skyscrapers” were unpopular and too expensive. Thus, Henri Sellier decided to lease the highrise buildings and the comblike ones to the 22nd legion of “gendarmerie” (police unit part of the army) while the “U” shaped building remained empty.

In September 1939, the French government decided to hold German and Austrian nationals in this building. These foreign nationals were quickly transferred to other camps in the south of France when German troops entered the country. As of July 1940, German authorities decided to use the “U” shaped building as an internment camp for French and British prisoners-of-war and then for “nationals of enemy powers” (British and Commonwealth civilians). As from August 1941, German occupants began to take retaliation against “Judeo-Bolshevik activities” and arrested many of Jews in the east of Paris. The “U” shaped building became a prison camp for Jews. From summer 1942, it became the major transit camp for the deportation many Jews from France to Auschwitz-Birkenau. From July 1942 to July 1943, the transport left from the Drancy-Le Bourget station. At that time, the camp was managed by the French authorities : the guards were French « gendarmes ». As from July 1943, the “Hauptsturmführer-SS” Aloïs Brunner was named commander of the camp. He decided to change the departure point of the transport from Drancy-Le Bourget to Bobigny station. From 1942 to 1944, 67,000 out of a total of 74,000 deported French Jews left from the Drancy camp, for the most part, to Auschwitz-Birkenau. 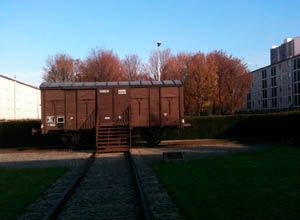 After the liberation of France in 1944, French collaborators were interned in Drancy. In 1946, the “U” shaped building returned to the purpose for which it had been built : social housing. This public housing project still exists today. The highrise buildings and the comblike buildings were destroyed in 1976.

Just after the end of the war, associations for victims and religious Jewish authorities organized ceremonies on the site. In the early sixties, commemorative plaques were affixed with the support of Drancy municipality. In 1973, a memorial project was assigned to the sculptor Schlomo Selinger. In 1990, a wagon was installed near the Memorial to symbolize the deportation of Jews. In 1980, a tunnel was discovered during construction work next to the “U” shaped building. This tunnel had been dug by internees in September 1943.

Classified as an historic monument 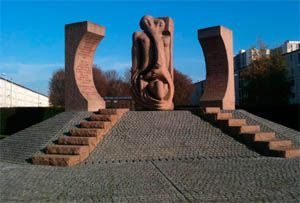 On May, 25th 2001, the “U” shaped building was classified as an historic monument by the French government as a “major architectural and urban achievement of the twentieth century…and because of its use as an internment camp at first and then as a regroupment camp before deportation making it today a national remembrance venue”. On May, 6th 2002, the tunnel was in turn classified. In 2005, Simone Veil, honorary president of the Foundation for the Memory of the Holocaust, announced the creation in Drancy of a new Center for history and memory dependent on the Paris Shoah memorial. This center was inaugurated on the 23rd of September 2012. The Shoah Memorial in Drancy: admission to the Drancy camp is free.

Same subject: Discover the rich diversity of urbanism in the area.