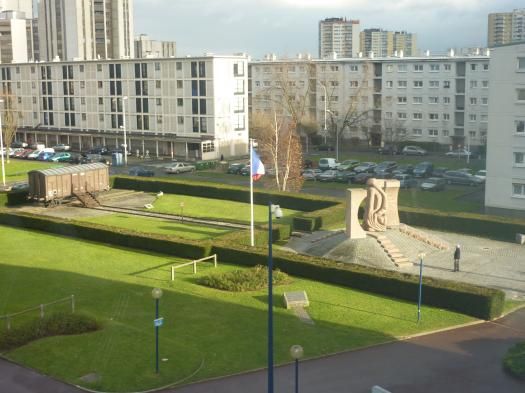 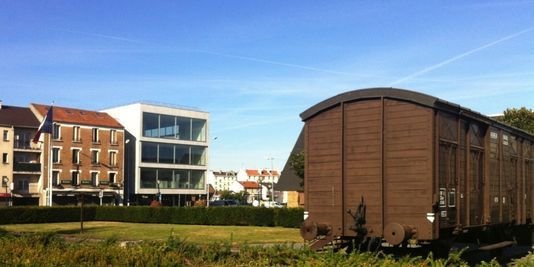 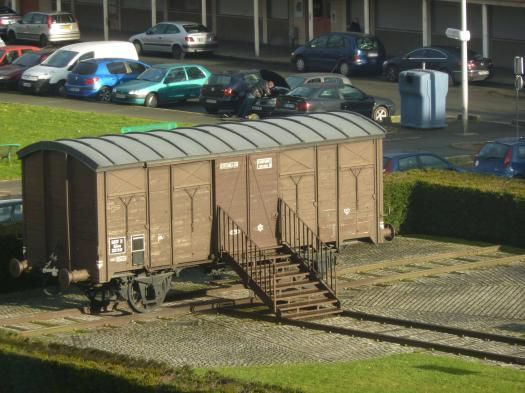 The National memorial Camp de Drancy consists of a memorial monument for deportees, designed by Shelomo Selinger (1976) and a witness-train car inaugurated in 1988. The memorial is located at the entrance of Cité de la Muette, this council estate had been transformed into an internment camp by the Germans from 1941 to 1944. Since September, 23rd, 2012, the Shoah Memorial, a place dedicated to history and education, was opened to the public opposite the housing estate Cité de la Muette in Drancy.

The Memorial monument consists of three blocks of pink granite 3 metres high placed on a small paved hill, forming the Hebrew letter "Shin". This letter is usually engraved on the Mezouzah on the door of Jewish homes. The central block is composed of 10 characters in flames. The two lateral blocks symbolize the portals of death. The sculptor and designer Franco-Israelian Shelomo Selinger had been deported along with his father from the ghetto of Chrzanow to the Camp of Faulbrück, in Germany in 1942 and had experienced 9 successive camps. Shelomo Selinger is also responsible for the Memorial of the Résistance, located at Quatre-Routes de La Courneuve in 1987.

"The railway tracks link the memorial monument of deportees to a witness-train car; it represents the path of martyrs". In the compartment, no less than 100 people were squeezed into it for their transfer to the gas chamber. This compartment of remembrance was inaugurated in Drancy in November, 6th, 1988. It was configured as an exhibition and educational place but had been empty for several years. You can consult all information from the Memorial of the Shoah in Drancy opposite. It was a freight-wagon, similar to those in circulation in the years 1940. The witness- train car was listed as part of Heritage Monuments in March 1990 as moveable cultural heritage (moveable heritage object of communal property).