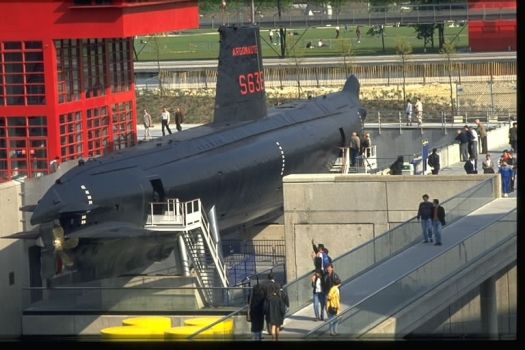 Argonaute is a submarine of the French Navy put into operation on October 23rd 1958 and disarmed on July 31st 1982. This Arethusa class submarine was re-built and adapted for visits and it is now exhibited in front of Cité des sciences, la Géode and the canal de l'Ourcq in the Parc de la Villette.

Argonaute (S636) is open Tuesday to Saturday from 10 a.m. to 5:30 p.m. and until 6:30 on Sundays. On leaving the submarine, you can enjoy an exhibition explaining immersion techniques as well as the military characteristics of the Argonaute, and you can also admire many models of submarines.

After more than 200 days at sea, Argonaute submarine was transfered from Toulon to Le Havre harbour (via Gibraltar). Before arriving at Porte de la Villette, the submarine sailed up the Seine River and passed through the seven locks on the Canal Saint Denis.