Seine-Saint-Denis: a rich and varied urbanism 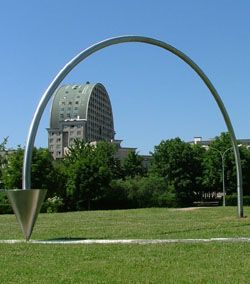 In an urban landscape, different architectural styles and all the layers of its past, come together, a house, a building or an entire neighborhood. This capacity to mix, this mosaic of life, reflect the architectural achievements in Seine Saint Denis; from the housing developments in Tremblay-en-France to the Palacio d’Abraxas de Ricardo Bofill in Noisy-le-Grand, through Garden-Cities in Stains and Blanc-Mesnil, la cité de La Muette in Drancy or the Maladrerie in Aubervilliers. This rich and varied heritage (Seine Saint Denis has the highest development of archetype suburban pavilions in the inner ring of Paris) can be seen throughout the territory and reflects the image of continuity which can be seen in its walls.