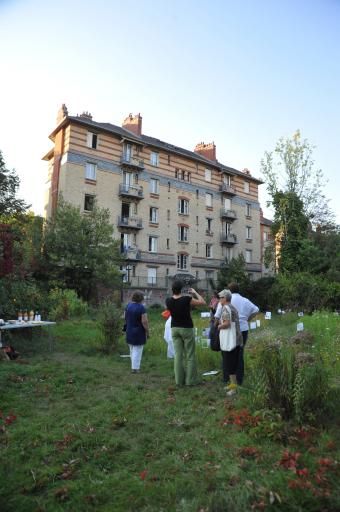 Stains has resisted quite well to the invasion of concrete. Its Garden City remains intact, the maze of allotments, remnants, its splendid theater and library which was inaugurated with a memorable speech, is all worth the detour.

The origin of the name is among the different hypothesis of the Latin word “Stagna”, meaning a swamped place, a pond. If you can spend just one day in Stains, come early. This small town, embedded in a dense urban fabric of society has kept those characteristics that distinguish the city from the traditional image of the suburbs.

The buildings, gardens, tree-lined avenues are a good reason for the “Stanois” – inhabitants,  to be attached to their town. Its geographical situation and the future development of the Cergy-Roissy line,  will give the town an even more significant role. You will naturally be tempted to start your visit by the famous garden city which has miraculously remained intact since its construction from 1921 to 1936. These affordable structures for residential development, built on the site of the park of the former castle, are prime examples of social housing before the war for the working class in Stains. Pavilions and buildings with gardens exist alongside shops (avenue Paul Vaillant Couturier, the former  Rue du Commerce) in this space of 250.000m² s where nearly 5000 people live. The area has hardly changed since its creation.

Walking tours in the city garden

The City Garden  was listed by the "Bâtiments de France" (architects) in 1978. It is a particularly pleasant visit, especially if you pay attention to detail: geometry, balconies, arcades, entries, streetlights… A piece of advice : Go down Avenue Paty, it is one of the most attractive streets. Then take Chemins des Huleux (“howling wolves”) winding alongside the Cerisaie (industrial zone) near the allotment gardens. There are six hundred in all, of all sorts and types, with their small huts made out bits and pieces – a city within a city. Between colored  rainwater barrels and the wind vanes, have fun trying to recognize tomatoes and cauliflowers, figs, chickpeas, peanuts and even grapes!

Maybe you will rest a while in the Aragon Library, on the seats in the newspaper room for example. Just remember that Eluard took the same route hundreds of times to visit his old father who lived in Stains and that Aragon came in 1958 to inaugurate the building. It was there that he compared the library to the best University, and he said, speaking of the people of Stains; “ I would like to make them feel that when passing the threshold of the library,  when opening the books, that each time it would be as if they were entering a world that was before unknown or forbidden to them. I hope to make them understand that one can live in Stains, in this region where the breath of Paris envelopes them, where market smells mingle with the smells of glue, paper, camphor, among the mechanic and machine workshops, and yet they can travel, travel like sailors, adventurers, thanks to books.”

Coming out onto the shady square, glance behind you at the eighteenth century altarpiece in Notre dame de l’Assomption (bell tower built in 1625).You will probably daydream before the remains of the castle of La Motte, of its former beautiful rococo style façade, where the Neptune mask no longer reflects in the pond, but which sees many the August visitor pass under its porch. And this is where Francis I of France promulgated the law prohibiting the removal of precious metals from the domain in 1523. You might be lucky and be able to see a show in the Studio Theatre , a show that reflects the times – civic, political in the full sense of the word, a reflection of the world today and the questions we ask ourselves. The façade, moldings and rotunda are listed as historical monuments. The patina of the walls and the way the floors are laid out, the small round tables for spectators and the multitude of small lamps, make it a magical place

.Visits of the city garden in Stains and other walking tours in the City Gardens in the Paris region are proposed all year long. Do not miss the program of industrial tourism around Paris: workshop visits, laboratory visits, open doors in factories and visits around art and creation in the Plaine Commune territory.