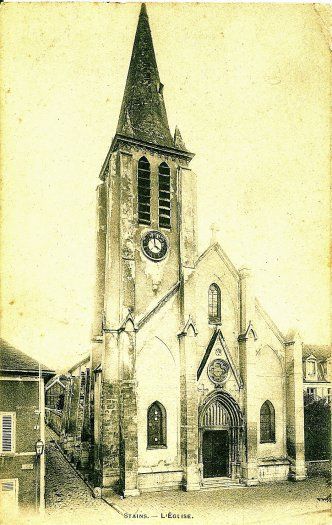 It is not really possible to date the construction of the first church in Stains but the market town was erected as a parish in 1213 by Pierre of Nemours, the bishop of Paris. The parish was not listed on the ecclesiastical register (state and enumeration of all deeds of property, and ecclesiastical dignities accompanied with the list of the tax of a specific region) at the beginning of the early thirteenth century. The church was completely rebuilt in the first half of the sixteenth century. It received its dedication on 10th June 1560, by Eustache of Bellay, bishop of Paris, under the patronage of Notre-Dame de Assumption and Sainte-Gemme. The cult of saint Gemme, invoked by infertile women, was introduced into France by Blanche of Castille. In the course of time, this dedication was gradually abandoned to the sole benefit of Notre-Dame of the Assumption.

The building was then presented as a rectangle of 33 meters long and 16 meters large supported by 26 pillars. The church was mainly constructed with large blocks of limestone from the Creil region. The characteristics of this construction, which simplified the bays on the north and south aisles, are proof of construction carried out quickly in order to overcome the massive destruction of places of worship linked to the Hundred Years War. The bell tower was built in the following century between 1625 and 1627.

The ribbed vaults of the six bays in the nave, built on a rectangular plan, have carved design sculpted keys several of which are engraved with escutcheons. The arches fall on piers, the octagonal capitals are decorated with putti (a chubby mocking angel) holding a coat of arms, sleeping angels with outstretched wings and lush vegetation. The former high altar of the eighteenth century is mounted by a magnificent altarpiece where the Corinthian columns frame the statues of the Virgin and Saint Gemme, opening in the center towards Mary carried by angels. This Assumption, dated from 1745, is the work of the painter Lieveau. It was listed as a historical Monument in 1973 and is now on display in the museum of Saint-Denis.

To the left of the choir, another stone altarpiece, also from the eighteenth century a statue of the Virgin Mary standing with both arms extended on top of its sculpted tabernacle. This attitude of the Virgin in prayer, called Virgin in Prayer, could symbolize the soul of a deceased. It is also the expression of non-violence, a sign of peace. In 1825, the bell tower of Notre-Dame of the Assumption was renamed Marie-Louise in homage to Sainte Louise of Marillac (1591-1660), faithful collaborator of Saint Vincent de Paul and founder of Filles de la Charité. Notre-Dame of the Assumption shelteres two tombstones. The first one contains the tomb of Toussaint-Bellanger (1662-1740), lord of Stains from 1714 to his death. He was the one who rebuilt the castle of Stains of which just the stables remain and which is the present day town hall. He died in Paris in 1740, and his body was buried in the choir of the church, near his wife who had been buried the previous year. The second slab dates from 1747. It protects the remains of Jean Tinthoin, tax prosecutor, director of the poor and former churchwarden (a sacristan who was in charge of registering those who received the alms of the church) the parish of Notre-Dame of the Assumption.

The church Notre-Dame of the Assomption was glorified by the painter Maurice Utrillo (1883-1955), towards 1930, who represented it in his painting Église de Stains.

The church closed down for seventeen years due to damage!

The different wars weakened the structure. The vaults needed to be repaired after the bombings in 1870, the stain-glass windows were destroyed by an explosion in 1918 and the bell tower were removed in 1950 due to its damaged condition. Although the Church was listed as a Historical Monument on 4th April 1984, the building collapsed and was closed to the public in 1995. Several worshippers in Stains attempted to encourage the renovation of the church as they had done before it was closed down, as this place of worship was also the venue for their cultural events. But the huge amount of renovation work, the high cost and the lack of resources had prevented any restoration from being undertaken.

Marcel Thirion, president of the asociation "Pour que renaisse notre église en centre-ville", had been fighting for ten years to convince the mayor of the town to save the church. In 2005, the association launched a petition and collected  6000 signatures! Finally, in February 2012, the municipal counselors of Stains voted the budget for the renovation of the church. Renovation work began in May 2012 for a period of two years. It was about time! The building was supported both inside and out by strut columns, the stairs leading to the organ was supported by scaffolding in order to repair the bell tower, Most pillars were not straight, the holes testify to recent archaeological excavations.

Under the direction of Daniel Lefèvre, chief architect of Historical Monuments, restoration work began. About twenty building workers and craftsmen worked daily on the site.  The construction site "will be both complex and spectacular", declared Daniel Lefèvre to Eric Bureau, a journalist from the daily press Le Parisien. "We will replace the limestone and cement walls which were restored in 1970 –by stone walls, whilst preserving the vaults and roof. And to prevent collapse due to ground instability, we will place a slab under the entire building."

Everything was rebuilt in this sixteenth century building from the foundations, walls, facade to even the furniture.  The city of Stains financed 60% of the construction work. "It was a major effort for a small city like Stains", explained Antoine Zamichiei, director of the city maintenance service. "The cost corresponded to the construction of three social centers, a thought-provoking subject. But the inhabitants of Stains attached great importance to their church." The regional Council and the cultural service of the town guaranteed the other 40% of the construction work. And the Church financed the interior decoration: design benches and the illuminated glass altar. December, 25th,  2013, Father Jacques Braem, the new priest in Stains, along with the bishop of Saint-Denis, celebrated the first Christmas Mass in this newly renovated sanctuary after one and a half years of colossal construction work.

Traces of the past spring up!

In 1995, several archaeological excavations were carried out. In the first bay of the nave, initial excavation work at the foot of the foundations of a pillar revealed a burial coffer or coffin sepulture and many human bones. The second survey revealed the foundations of other construction work. A third one, opened to the south of the church against the wall of the nave at the level of the last bay, revealed a foundation layer. Finally, some granular ceramic shards were found in the open excavation outside the church. To the east and south, an area measuring about 750m could correspond to a former cemetery which was transferred in 1826.

Where results of the surveys remain modest, renovation work has revealed some pleasant surprises. Restoration of the columns supporting the ceiling vaults led to the discovery of four frescoes dating from the sixteenth century, representing the apostles, to the great satisfaction of Michel Baumale, the mayor (PC) of Stains. "For a long time, specialists of historical buildings, artists, told us that renovation work was impossible, that the place was too timeworn, recalled the first magistrate of the town. It is a satisfaction to have had it done. This church is part of the history of the old town".

Related : The commune of Stains