By participating in the experience of Villes Nouvelles, notably that of Marne-la-Vallée, Noisy-le-Grand has attracted great contemporary architects such as the Spaniards Ricardo Bofill and Manolo Nunez-Yanowsky. The former had been noticed not only for the creation of his famous building Palacio d’Abraxas (Hunger Games shooting location) but also for the Arc and the Theatre; the latter with the construction of Arenas de Picasso. 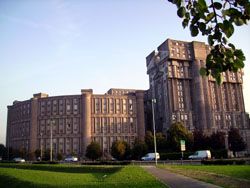 All cities were, by definition, "nouvelles" since their creation, and known as "villes neuves" in the Middle-Ages. Several communes have since, conserved all or part of the denomination. The Middle-Ages had been, in this regard, very prolix, but the towns originally opted for the implantation of an altar that, with the growth in population, was then transformed into a parish. They were the fruit of a human adventure and belonged to urban history. The originality of Villes Nouvelles, born in the twentieth century, is that they are the result of a planned global project.

In early 1960s, the major French agglomerations (Paris and its suburbs, Marseille, Lille, Rouen, etc.) were subjected to an intense demographical growth resulting in an urbanization boost. Following the 1962 census, demographers predicted about a 50% population increase by the year 2000. Concerning the Paris region alone, future forecasts predicted an increase of fifteen million inhabitants by the end of the twentieth century. Furthermore, major metropolitans towns were to go through a serious housing crisis (at that time construction was four times less than the necessary output) but also, and perhaps above all, they suffered from the lack of a real housing development project. The idea of "villes nouvelles" was thus born of the awareness of these problems.

Marne-la-Vallée region (like the four other districts in Ile-de-France: Cergy-Pontoise, Evry, Melun-Sénart, became Sénart, and Saint-Quentin-en-Yvelines) were part of the master plan of urban development and the Urbanism project in Paris Region (SDAURP) which emphasized the need to create "villes nouvelles" equipped with all the necessary daily life facilities for the inhabitants (jobs, accommodation, equipment) in order to avoid considerable loss of time in transport and movement. A three-prong strategic approach emerged to establish: Jobs and housing, habitat and equipment, construction and nature. The Ville Nouvelle of Marne-la-Vallée emerged on August, 17th, 1972 with the creation of Public Development Establishment (EPAMARNE), technical structure emanating from state funds and was put in charge to construct the new town.

Ever since their creation, Villes Nouvelles had not been well accepted by the communes concerned and provoked protests of public outcries almost everywhere. Indeed, elected local officials requested to maintain urbanization control in their communes and refused the unique town project brought about by this process. Various law arrangements allowed for the continuity of the Villes Nouvelles adventure. Marne-la-Vallée consists of 26 communes which extends onto three departments, Noisy-le-Grand in Seine-Saint-Denis (the only city of this department), and covers 15,000 hectares. From the point of view of the architecture of Noisy-le-Grand, it was Henri Ciriani who began the process with Noiseraie, Butte Verte, a complex built from 1975 to 1980. He was seconded by the Spaniards Ricardo Bofill et Manolo Nunez-Yanowsky. 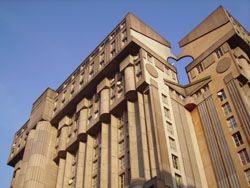 Ricardo Bofill born in Barcelona in 1939. He was only 24 years old when he founded his interdisciplinary agency, "Le Taller de Arquitectura", composed of architects and engineers but also of sociologists, historians and philosophers. Their joint reflexions led them to try to answer thecurrent urban problems brought about by new structures. Inspired as much by Antoni Gaudi (1852-1929), as by African architecture, the members of Taller de Arquitectura created several social housing complexes in Spain, giving thus, international fame to Bofill,. The French architect François Mansart (1598-1666), who already had significant influence on the construction of a number of castles and manors in Seine-Saint-Denis, had a real influence on the Spanish architect who tried to deliver a néo-classic style.

His intention was not to copy the beauties of Antiquities but to transpose them by integrating them in to local particularisms by using the technology at that time. "Different styles and treatments come together in the same historical moment, and it is this complexity that makes up the interest of the city ", he wrote. Ricardo Bofill was behind a dozen or so constructions in the Paris region, essentially in Villes Nouvelles. In Noisy-le-Grand, he designed, in his usual néo-classical way, Espaces Abraxas, in the Mont Est district, with a complex of three buildings: Theater, The Arc and the Palacio. He marked the town with his particular style of drama and excessiveness. These constructions were, for him, the answer to mass architecture, those of social housing, created by architects devoid of style. He formulated his answers according to these three points: "diversity of functions", "reference to human size scale" (sic) and "the quality and esthetics of public spaces".

Le Palacio, a massive building with 18 floors, has four staircases serving about 250 apartments. The Theatre, with its more modest look, surrounds a square recalling an antique theater. Organized according to a half cylindrical shape, the dozen stairwells each serve a dozen apartments. The two sets are located on either side of the stairwells which join together on the seventh floor to form an arch. The Arc.

The post-modern manifesto that Bofill constructed in Noisy-le-Grand is probably the most mannered and expressive, but also the most dense and massive. Some say it is the indecision between tradition and progress and, indeed, its architecture is highly controversial. Where the prefab pink hued concrete similar to the sandstone he used is at its best in the sun, it becomes very hard in bad weather, giving the whole an austere appearance that earned it the nickname "Alcatraz".

In 2006, the project of the commune of Noisy-le-Grand to demolish the 600 apartments of Palacio, in order to feature in the large Urban Project authorized by ANRU, sparked off great emotion among the population of Espace Abraxas. As for the majority of large ensembles, its occupants, even if they denigrate some aspects, have re-appropriated the place. Each of them recolored it with their personal touch and attached a piece of their life. The Collective group anti-demolition of popular working class quarters in Ile-de-France informed Ricardo Bofill of the project of eventual destruction. The architect was also emotionally touched and promised to be "very attentive to the evolution of the case". It is certain that the whole ensemble needed renovation done to it. But should it be really be demolished? Stay tuned… 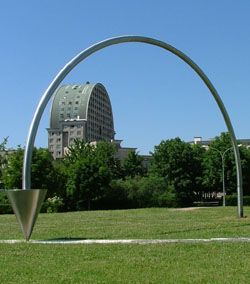 Born in 1942 at Samarkand in Ouzbékistan (ex-URSS), Manuel Nunez-Yanowsky arrived in Spain in 1957. He graduated in history and archaeology at the University of Barcelona and DPLG in France. Alongside Bofill, he is one of the founders of "Taller de Arquitectura" and, in 1991, created with Miriam Teitelbaum SADE, an architecture and urbanism agency based in Paris and Barcelona.

At the origin of many urban planning programs throughout the whole world, he chose, in France, to "combat the ghettoization of the Parisian suburbs by favoring the harmonization of the urban fabric in order to improve the social condition of its inhabitants". Like Bofill, he intervened largely in "Villes Nouvelles". Both of them have the same admiration for Gaudi and postmodernism. According to the Dictionary of Architects, Manolo Nunez-Yanowsky nurtures the baroque and the unusual, manipulates provocation, but gives back a prominent part to sculptures in the decoration of the facades. He is considered as one of the most original creators of contemporary architecture.

At Noisy-le-Grand, Nunez was appointed to design the architecture of housing projects in the Pavé Neuf neighborhood. He designed an ensemble, the Arenas de Picasso, featuring an abstract representation of an overturned carriage. The buildings are built around the square which has, at its extremities, two cylinders whose axis is parallel to the equator

Since its construction, popular tradition has baptized both cylinders as "camembert" or "tambours". We are very far from the poetic image of wheels of a carriage... The constructions in the area of Noisy by Ricardo Bofill just like those of Manolo Nunez-Yanowsky have often served as settings for cinema or for clips. Scenes from Brazil by Terry Gillian or from A mort l’arbitre with Michel Serrault were shot at Espaces d’Abraxas for the first, and at Palacio for the second. Billy Ze Kik, with Francis Perrin in the main role was shot at the Arènes de Picasso as well as the clip by Cheb Mami & K-Mel, Parisien du Nord, and the beginning of Stéphanie de Monaco’s Ouragan.

In 2015, Espaces Abraxas was used for several shots of the film Hunger Games.

How to get to places like Abraxas and Arenas Picasso

Both buildings are located in the Mont d'Est district in Noisy-Le-Grand served by RER A Noisy-le-Grand Mont d'Est station. Arenas Picasso is located at Place Pablo Picasso and Espaces Abraxas at Place des Fédérés.

If you have to stay in Mont d'Est district for business or pleasure, you can book a hotel at Noisy-le-Grand.

If you enjoy walking, you can also try the PR27 hiking path that goes through these places.

Check out the rest of urbanism in the area.