What to see, what to do, what to visit in Tremblay en France (93) 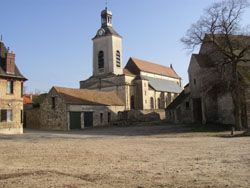 Tremblay-en-France, (the inhabitants are called “Tremblaysiens”), takes its name from the aspen parkland now disappeared. But don’t worry: there is still enough space to breathe, walk, and to visit numerous works of art, especially in the famous district “Vieux-Pays”.

From aspen which gave its name to Tremblay-en-France, all was forgotten, if not this denomination, fairly common in France and particularly in Canada. Aulnoye forest stretched from the borders of Pays de France to Gagny and formed a massive range of about 3500 hectares. An important part of it was managed by the king: the royal forest of Bondy Livry. In Tremblay the forest called Le Bois Saint Denis belonged to the church. It seems to have reached its maximum afforestation in the mid-eighteenth century. Its anarchic exploitation and urbanization in the twentieth century were criticized. The 2240 hectares that constitutes the communal area, the forest covers now only 80 hectares.

The urban park, habitation and canal de l'Ourcq coexist peacefully now in the heart of the city; you will take delight in identifying most of the main scents of the Tremblaysian’ Silva: its hornbeam (half of the forest), country style marple, common oak, beech, birch, poplar, cherry wood, Austrian black-pine, black locust and some aspen canopy blowing softly in a westerly wind. You can also admire the alignment of Wemouth pines, Rue Olivier de Serres in the city and some beautiful century old trees in the park of Château de la Queue at the Vieux-Pays. You can also discover agriculture in Tremblay and the rest of Nothern Paris.

In 1987, Tremblay en France was given back its name of which written traces can be found in the seventh century under “Tremolito”. Henri IV apparently went hunting here accompanied by gallant company. The southernmost district of the city, south of the canal, bears the nickname “Vert-Galant” The denomination "Château de la Queue" comes from the tail-shape at the end of the forest. Les Bruyères, Le Buisson-Robert. Le chemin des Vaches, Le chemin du Loup, Le Chemin des Pommiers are localities and pathways that prove the influence of a natural and agricultural environment at the time of our ancestors. Settlement in Tremblay dates back to the Paleolithic and Neolithic periods asserted by the bones and many tools that were found during farming activities. The village took form around the Sausset stream that supplied it with water until recently. In the middle Ages, the village was already composed of two distinct parts, the Petit and Grand Tremblay, both in the wake of the abbey of Saint Denis. Due to its distance from the capital and major roads, Tremblay remained sheltered from great movements in history. It was the urbanization of Paris between the two wars that radically transformed  the town.

June 13, 1940, the French Army units on retreat hit upon the German units at Vert Galant on the site of the current railway station SNCF. The battle was very violent. On the night of 13th to 14th, fifteen civilian hostages were shot, ten others were deported and others were imprisoned. Battles on Ourcq Canal were not due to a skirmish of isolated soldiers cut off from their commanding units. French armies in the line for battle on successive fronts attempted to contain the German troops storming into Paris. The Germans did not expect to meet with such serious resistance in Tremblay. Their losses transformed a military confrontation into a criminal reprisal. Hundreds of civilians were gathered at the square. Victims were from all backgrounds and professions. Women were excluded. Those who were shot were selected from the surrounding towns with a majority from Tremblay and Villepinte.

Visit of the Vieux-Pays district in Tremblay

At Tremblay, you will be naturally attracted to the Vieux-Pays district which holds many interesting places. The “grange dîmière” - tithe barn (9 place de la Mairie) which was the headquarters of the village manor, used for the administration of the fiefdom, a large building composed of elements from the 13th, 15th and 17th centuries. The rafters, 18 metres high, is supported by large barrels laid on stone pedestals. In February 1794, a great civic banquet brought all the population together in the barn which was at the same time a sign of subservience and the largest building in the town. The remains of fortifications of the twelfth century; around which Abbot Suger ordered a wall to be built to surround the ancient castle of  Grand Tremblay.

Church Saint-Médard, construction work began in 1543, and was restored in a style that re-humanized mysticism and the gravity of early gothic art. We marvel at the vision of the vault with multi-rib vaults intersecting ribs in star key carved Corinthian capitals. The “Borne des Mortières”, a Royal milestone with sculpted design can still be seen there. During the revolution, fleur de lys had been replaced by a Phrygian cap with a peak. See also, the old town of the eighteenth century at rue de la Mairie, Popot farm and Cuypers barn from the eighteenth century, allée Moulin-Mabeux, zaffani farm from the eighteen century; 39 rue Louis Eschard and its monumental gates, its dovecote and do not forget the vestiges of the Tournelles castle, seventeenth century at chemin des Saints-Pères.

Enjoy more achitecture by discovering the urbanism in the area.