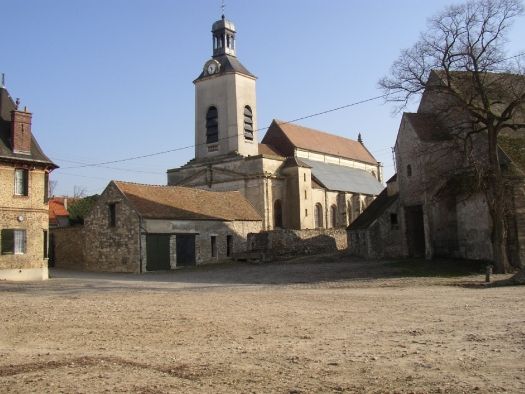 The parish of Tremblay-en-France The "parochia of Trembleium") has a longstanding history. But the construction of the present day church is more recent as it began in 1543. However, you may think that a primitive building occupied the premises as a church was cited in Grand Tremblay in the early Middle-ages and that its lower sections revealed cut stone blocks dating from the thirteenth century.

Visible traces of an ancient era

The church was dedicated to Saint Médard in September 1579, twenty years after the end of its construction that Hervé Revel situated in 1557. To give this date, the historian referred to the presence of the coat of arms of the Abbots of Saint Denis found in the interior sculptural decor. On the central keystone of the eighth bay of the half-arch, figure the coat of arms of Cardinal de Bourbon, abbot from 1529 to 1557. Those of his successor, the Cardinal of Lorraine, cannot be found in the church. The present church Saint-Médard is thus posterior to the Tremblay en France tithe barn.

This building, constructed in the sixteenth century, expanded in the eighteenth century. The architect, Jean-Jacques Cellerier, native of Dijon, made his mark in Paris between 1772 and 1780. In September 1781, he went to Tremblay and drew up a cost estimate for the erection of a front-nave in order to rectify the bell tower in disrepair  and the nave of the church. Like many other churches in Seine-Saint-Denis and, in particular, Saint-Sulpice in Aulnay-sous-Bois, Saint-Pierre-Saint-Paul in Montreuil, Notre-Dame des Vertus in Aubervilliers or Saint-Baudile in Neuilly-sur-Marne, Saint-Médard conserves visible traces of the period of its construction.

Saint-Médard church, oriented towards the east (Jerusalem) is built in the form of a “barlong” edifice (perpendicular rectangle), devoid of transept (the transversal nave forms the cross which can be found in many churches).  The building consists of two distinct parts: the eastern part from the sixteenth century including the apse where the sanctuary is located, the last four bays of the vast rib-vaulted half-arch. The western part, from the eighteenth century contains the first three bays, the bell tower, the vault, the columns and the window openings of the fourth bay.

The vicissitudes of history

The church witnessed a multitude of assaults linked to the building itself but also to its sacred nature. In the second half of the seventeenth century, the Fronde impacted on the countryside around besieged Paris. A terrible siege left this part of the kingdom in great poverty as proved by an Estat, an account of the hardship in the countryside and the needs of the poor around Paris, drawn up in 1652 by the Archbishop of Paris: “A Gonese, for the whole expanse of circumjacent counties, Le Bourget, Villiers-le-Bel, Aulnay, Sevran, Bondy and others, where the last troops marched…. As for the churches, broken glass was found, pews upturned, tabernacles opened ...” In Tremblay, an official report of the profanation was drawn up in 1656 after the holy-bread, contained in the tabernacle, was scattered on the ground. This act deeply upset the religious followers at a time when religious offenses were still punishable by an ecclesiastical court and severe judgement handed out.

During the revolutionary period, Saint-Médard, became a Temple of Reason, and was literally disfigured since the figures and epitaphs were erased, the statues and paintings were removed or destroyed. The marble tomb slabs (tombstones covering « people of quality » buried in the church) were unsealed and sold.

Yet, three of these tomb slabs managed to come into our possession with precise indications for two of them. The first, 1653, perpetuates the memory of an Attorney general of lands and dominions in Tremblay, Villepinte and « other places ». The second, 1693, marks the burial place of Pasquier Gosse, the parish priest of Tremblay, who died 26 November 1646 at the age of forty. His sepulture was recovered with a white marble tomb slab nearly fifty years after his death.

Saint-Médard church is listed as an historical monument

This edifice witnessed other tragedies (notably in 1814-1815) that add to the natural deterioration with time, requiring many restoration campaigns which give it today a composite appearance. The church was listed as a historic monument in 1930. The first phase of restoration works, in 1969, allowed for restoration of the choir. A second phase in 1976 concerned the stained-glass windows, the bell tower and the nave. Since 1979, restorations have picked up again after the local council obtained management of the restoration project.