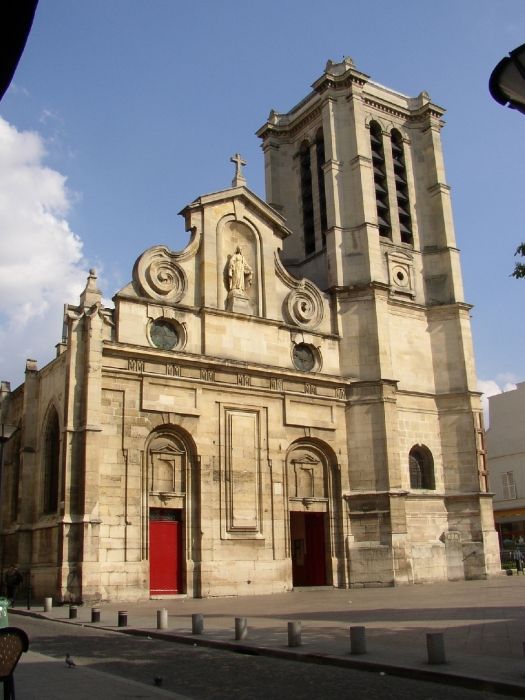 The situation of the church in relation to the town of Aubervilliers is representative of the constitution of medieval hamlets in the Middle Age. Initially, it was a chapel around which houses were built. The parish was created, specifically around the Saint Christopher chapel, patron saint of the hamlet and whose name is still used to call the path leading alongside the Church. A main road led to the chapel, rue du Moutier (an ancient word to name a monastery, a church or chapel) and the village gradually grew around the street and chapel.

Notre-Dame-des-Vertus: a place of pilgrimage

We are in 1336 and a long drought distressed farmers in the village. On 14th May of that year, a girl who was praying to the Virgin in the chapel saw the statue‘s eyes streaming. At the same time, rain began to fall! The place became famous for this miracle. The Marshal of Toulouse offered church-candles in homage to the Virgin. They are still visible, exposed in a glass-display case located on the left  aisle of the church. After the miracle of the rain, the chapel was too small to be able to contain the influx of pilgrims, in particular the processions coming from Paris to the Basilica, that stopped at the miraculous chapel on their way. In the fifteenth century a church was built on the site of the chapel. Notre-Dame-des-Vertus was constructed according to a rectangular shape, like  a hall. The church features a particularly outstanding centre-piece with a representation of the Virgin and child. On this piece, the statue of the virgin has the particularity of carrying the child Jesus on her right  arm, while usually, statues of virgins with child carry him on the left arm.

The stained glass windows of the church relate the pilgrimages and the different miracles performed by the Virgin in the chapel, of which there were many apparently, such as the resurrection of a child or the healing of sick people. During the revolution of 1789, the statue of the miraculous Virgin was profaned. It was dragged on the road leading to Saint Denis with a rope around its neck; the Sans-Culottes movement burned it singing the French song “Carmagnole et Ah! Ça ira!” One of her hands was saved from the flames and was preserved. The present day statue of the virgin, located in the left chapel, was sculpted in lime wood by Baffet House in 1873. It is the copy of an ancient statue found that year in the chapel Saint-Julien-Le-Pauvre at Hotel-Dieu. It was inserted into a Neo Gothic frame, flanked by two angels holding phylacteries, (a coiled-end speech scroll bearing legends) which recall the miracle in which, in 1582, the Virgin brought a stillborn child back to life.

Construction of the church completed 3 centuries after the rain miracle

After its victories over the Protestants, Louis XIII decided to thank the virgin. To show his gratitude, he ordered the construction work of the façade of the church Notre Dame Des Vertus in 1628, built in the baroque style of the church of Jesus in Rome. That façade put an end to the construction work of the church three centuries after the miracle of the rain that had made it famous but artworks continued to enrich the interior. Thus remains, the central pillar capitals, vestiges of the construction dating from the fourteenth and the fifteenth centuries, an oil canvas painting representing “ Christ in the Garden of olives” (eighteenth century) and a portrait of the Incarnation which dates from the nineteenth century.

The grand organ is the only unique copy from the seventeenth century in Ile-de-France. The buffet and its décor were made around 1630. The workmanship of this instrument, rebuilt in 1770-1780, was the work of François Henri Cliquot,  heir to a famous French family of organ builders. A listed building, the church Notre-Dame-des-Vertus has been completely restored.