Not to be missed visits and things to do in Saint-Denis, royal city

City of kings and lands of events, birthplace of Gothic art and royal necropolis of France, Saint-Denis is a city of art and history to visit. This is where Stade de France has found its place. 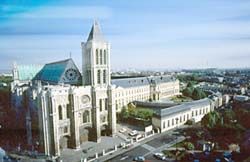 The origin of the name comes from the latin word "Dionysius" burial place of Saint Denis, the first bishop of Paris. In the middle ages it was called "Paris near Saint-Denis" meaning that beyond the prestige of the Basilica and its abbey, Saint-Denis played a strong economic role, especially with the Lendit Fair which attracted merchants from all over Europe. This tradition continues with the cosmopolitan market of St-Denis that can be visited during guided tours. The city of a thousand trades is today the successful pivot of regional commercial attractions. It is a sub prefecture of the department and one of the largest cities. This economic hub in Ile de France, the city of kings counts for a large scale of industries. Following the historical timeline, visitors can discover an important medieval city and the fate of the French monarchy.

Start your tour with the Saint Denis Basilica. In the fifth century, St Geneviève made St Denis a pilgrimage destination. Dagobert transformed it into an abbey in the seventh century and Abbott Suger, the birthplace of Gothic art in the twelve century. This masterpiece monument, counting for about nearly 70 tombs and royals recumbent effigies, is both a valuable record of the architectural history and a symbol of the history of France. Church "Neuve" Saint Denis de L’Estree faces the Cathedral Basilica of Saint Denis.

Maison d’éducation de la Légion d’honneur, the building of the royal Abbey of Saint Denis completed under the reign of Louis XV is a fine example of French architecture with all the characteristics of the XVIII century. Napoleon ordered its transformation into Maison d’éducation de la Légion d’honneur, (House of education for girls with hereditary rights of the Legion of Honor). This old monastery is a remarkable place in the heart of the city.

Musée d’art et d’histoire (Art and History Museum) in the ancient Carmelite convent where Louise de France lived, daughter of Louis XV, showcases excavated archeological artifacts. A Superb collection of apothecary, a unique collection of the Paris Commune, Paul Eluard and the Surrealists and the sumptuous chapel by Richard Mique.

Go for a self-guided walking tour in the city center for its contemporary architecture by : Simounet, Ciriani, Gaudin for the city hall and the Humanity Newspaper building is the work of Niemeyer. Many more ancient buildings such as Maison des Arbalétriers or the covered market hall of XIX century can also be visited. Enjoy a walk along the pathways in the Parc de la Legion D’Honneur.

At the end of the nineteenth century and thanks to its ideal location, Saint Denis saw the development of a great number of industries. As in most of the Paris Basin de-localization of entire industrial sectors led to the emergence of significant industrial-wastelands. A gradual shift towards the service sector emanated. Many businesses emerged, including audiovisual broadcasting. Saint Denis La Plaine is now home to the largest film-service sector and studios in Ile de France.

Saint Denis la Plaine district draws upon the rich industrial heritage of the nineteenth and twentieth centuries and now accommodates companies at the cutting edge of progress : Les Magasins Generaux is home to television studios; the Montjoie center of activity shelters Gaz de France research centre and  EDF production headquarters, CNAM (National Conservatory of Arts and Crafts); Pleyel district; the Spanish quarter Cristino Garcia, and the TGV-Nord maintenance department. The Cornillon site now boasts the modern day sports stadium, Stade de France with its brilliant design and its eighty thousand seats. It staged the 1998 world cup football championship and is also used for large scale concerts, Euro 2016... Integrated into the urban project of la Plaine Saint Denis, the Stade de France and its site have become a main attraction in the town.

Conference-visits and tailor-made one-day discovery tours are organized all year round for groups. As for the individual visitor, an agenda of walking and guided tours will ensure him/her a hassle-free and productive experience of the territory available only by prior reservation on our site.

In addition, The town of Saint Denis accommodates two prestigious universities Paris VIII and Paris XIII and certain laboratories can be visited as part of the program on company-visits. Many tours and walks are organized all year round in Saint Denis and in the territory of Plaine Commune.