An architectural promenade in the footsteps of Oscar Niemeyer in Paris 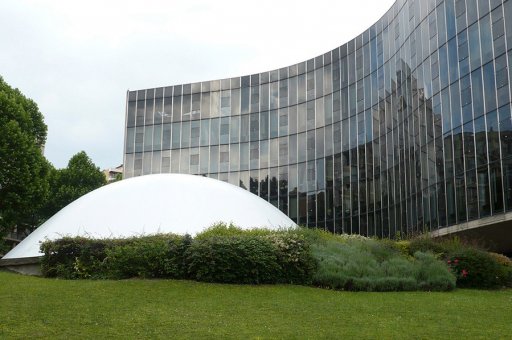 The famous Brazilian architect and designer Oscar Niemeyer played a major role in modern architecture. Even though this carioca achieved international renown for his work in the city of Brasilia in 1960, several of his achievements can be admired in France. He left Brazil with the accession of a military dictatorship to power. Count about half a day to appreciate the visit of these three buildings located in Paris and in Seine-Saint-Denis.

The curvy architecture of the headquarters of the French Communist Party

Rendezvous at Place colonel Fabien; at the limit of the tenth and nineteenth district of Paris easily accessible via metro line 2. It was Niemeyer who sketched the present day headquarters of the French communist Party in the seventies. The building, all in curves, was completed in 1971 while the dome, the parvis and the underground lobby were completed only in the late seventies. The building rests on five pillars of solid concrete around which articulates the interior of the large hall where the chamber of the National council is based.

Oscar Niemeyer was an admirer of curves which he favored in place of right angles. The French Communist party headquarters is characterized by curves drawn to hide the buildings adjacent to it. The FCP building is listed historical monument since 2007.

The finesse and elegance of the labour exchange in Bobigny

Turn your back on the FCP headquarters and walk a little along boulevard de la Villette. Take the metro at the station Jaurès on line 5 for a few stops to the end of the line: Bobigny Pablo Picasso. From there you can take the tramway for two stops and get off at the station liberation or else walk along the tracks on avenue Lénine in direction of Saint-Denis to get to Labour council building of Bobigny. This building which is located at the angle of boulevard de la Libération and rue de la République, was constructed between 1976 and 1978 by Nieyemer. The architectural lines of the labour exchange building, consisting of two distinct sets, reflect the style of Maison de la Culture in Le Havre on which Niemeyer worked between 1978 and 1982. Admire the curves of the two buildings that rise up as one single block with a finesse that concrete allows.

Niemeyer and the headquarters of the newspaper “l’Humanité”

Leave Bobigny by taking tramway line T1 to the Basilica Saint-Denis - Hotel de Ville train station to arrive at the former headquarters of the daily newspaper Humanité. It was designed by Oscar Niemeyer in 1987 at the request of the director of the newspaper. The Brazilian architect was asked to design a building that complied with the dimensions and the layout of the facade located at place de Montreuil, offering an excellent view of Saint-Denis Basilica. Niemeyer designed a Y-shaped building, which was once again all in curves, a volute marking the entrance to the building. The building facades and roofs are listed as historical monuments by order of a decree, April, 23rdr 2007. The newspaper Humanité has since moved and it is the French state that became owner since 1st January 2010.

Other Works designed by Niemeyer in France

In the Paris region, one can see another creation realized by Niemeyer at Fontenay-sous-Bois (Val-de-Marne). It concerns the building housing the Société Générale and the iconic building “la scène Nationale le Volcan” located in Le Havre in Haute Normandie.

For further information on the theme of architectural heritage

Visit our pages dedicated to the heritage and history of Seine-Saint-Denis and the pages devoted to urban architecture. You can also check our Art Nouveau-Art Deco architecture walking tour if you're ready for an original visit of Paris.