What to see and sites to visit in Bobigny 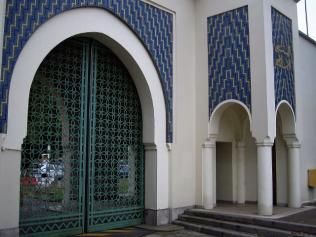 Bobigny is today the prefecture of Seine Saint Denis. In the eighteen century, Bobigny was a modest village with 31 habitants. It’s come a long way…

The origin of the name is "Balbiniacum", the property of Balbinius, a Gallo-Roman owner from the third or fourth centuries. It was then a castle surrounded with walls, a few houses and many fields. While all families of lords with prestigious names (Montmorency, Gisors, Sévigné) worked with the kings or war-fighters, peasants cultivated the lands. With the Revolution, the feudal and religious powers “fell”. In 1815, Prussians invaded France for the second time. Many residents fled. But it was in 1870 that the town was practically razed mostly by French fire.

In the early twentieth century, market gardeners succeeded the farmers. And since then, walls rose around the fields as well as the characteristic black cistern (water tank) adjoining their farms. A Provincial population began to arrive also. Bobigny was to remain a market-garden town until the arrival of a new population of workers. In the 1970s, the town underwent a new transformation to be able to house an increased influx in the population. Towers began to emerge from the ground as well as large shopping malls and schools. The village became a town, the Bobigny of today, “capital” of Seine Saint Denis since 1965.

The “Mission Archéologique” (Archaeological mission) has updated traces of a Gallic farm from the late second century BC on the current site of the Avicenne Hospital, vestiges of a network of Gallic and Gallo Roman ditches in the –urban development zone Vache-à-l’Aise. Objects: (bracelets, pottery, shaped-bones) and a rare anthropomorphic statue were exhumed.

Coming out of the Bobigny Pablo Picasso metro station, the prefecture buildings around Place du Parvis built in 1968 and 1971 by Folliasson can be seen. Crossing the mall Bobigny II, place de la Constitution de l’An I ; observe The city Hall built in 1974 by the architect Marius Dupont. Its triangular shape looks like a beehive. Cross the park to visit the church Eglise de Saint André and go through the petanque strip which leads to Place de la Libération bordered by the former City Hall which is now the current National Music, Dance and Drama-Arts Academy “Jean Wiener” and la Bourse du Travail designed by Niemeyer (1987). Walk back to the metro station by Lenine Boulevard and stop at Maison de la Culture. 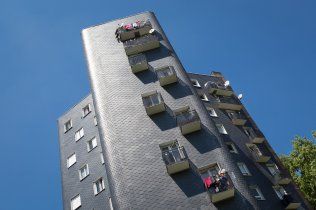 From the bus station, take bus line 134. The district built by E. Aillaud is an example of a 1950s architecture, offering a modern comfortable healthy living to families. 1500 accommodation facilities were built and trees planted around the shopping mall which include social amenities and smaller shops.  From avenue Edouard-Vaillant towards Place Saint-Just, stop by Jacques-Brel nautical center. Take a look at Bobigny’s  Palais de Justice, you will notice the surprising arrangement of the audience hall. Walk back to the metro station by the footbridge which runs over the A86 motorway.

It is surprising to remember that Asterix was born in Bobigny, where Hervé Goscinny lived just a few steps from Vache-à-l’Aise. Bobigny was built with and around contemporary art. Take a look at its streets, avenues, squares, and more than fifty art-works from Victor Roman to Roger Somville, from Zvenigorodski to Sigg, from Lorjou to Nunez. Maison de la Culture, and its regional vocation, offers Balbynians the possibility to hear and meet some of the greatest music directors from around the world. Magic Cinema alone welcomed more than 300 films-film-makers, actors or directors in the last ten years. The municipal public library has departmental collections on the Holocaust. The Elsa Triolet library is the documentation center on books for children « Livres au Trésor ».

Sites and places to discover during your visit in Bobigny

Things to do and see in Bobigny