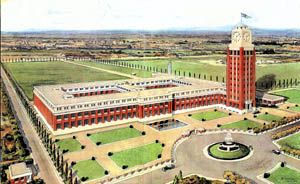 During the 1930s, industrial architecture found its place on the international and French scene with the arrival of the Modern Movement. Among achievements closest to this movement were the « Bronze industriel » (copper alloy fittings) (1934) and the former BSN company (glass-making company) (1930), both located in Bobigny. The Cusenier distillerie, built in 1939 was located in la Courneuve.

The origin and success of brick-made architecture in the industrial world seems to be due to publicity made around the new printing press Illustration inaugurated in 1933, in Bobigny, in the presence of the Minister of Home Affairs. Today, the former printing press ilustration factory hosts the Paris 13 Bobigny campus.

Rationality and esthetics for the new printing press in Bobigny

The magazine Illustration founded in 1843 had a resounding success with the public due to the original idea of the creator to insert illustrations, sketches and photographs (hence its name) in order to enhance stories and investigations. Less than a century later, in the early 1930s, the newspaper was printing more than two thousand copies.

It was imperative to expand and modernize especially as the board of directors wanted to be equipped with machines adapted for rotogravure and offset, in order to reproduce colour drawings and photographs. The offices in Paris located on rue Saint Georges were preserved, but the editor of this weekly magazine acquired, in 1931, thirty hectares of market gardens in Bobigny, on the site of the "Vache-à-l'aise", which is today a hotspot for archeological excavations in Bobigny, in order to build his new printing press.

The General Secretary of the company, Louis Baschet, was at the origin of the conception of the project of the new printing press, based on two essential principles: rationality and esthetics. Regarding rationalization, all stages of production were concentrated in the same place. The three levels of the building corresponded to the three stages of manufacture of the magazine: composition, printing, book-binding, limiting thus the continuous comings and goings.

For the inauguration, the Illustration company released a special issue on July 1st, 1933, which was entirely dedicated to the new building, the spearhead of industrial architecture of those years, in which you could read: "Louis Baschet, for the last few months, has, in his mind, imagined the lay-out of the future plant.. To perfect his documentation, he visited similar installations, whether it be in France or abroad. He had made several study trips to the United States, England and Germany. And then, did  he not have with him the expertise of collaborators : René Lefébure, head of drawings and Illustration department for the esthetic aspect and Henry Hischmann, who engineered the technical part ?  It was exclusively with them that he wanted to work: Louis Baschet, René Lefébure and Henri Hischmann, and he added to the list, his assistant Henri Tannière; they were truly the brains who decided to create this rational and harmonious steel and concrete framework in Bobigny."

An esthetic quality close to the Modern Movement

The weights of the machine imposed heavy burdens on the floors and the conventional metal structure was replaced by a system of reinforced concrete columns and beams. This system was cheaper and allowed for greater loads that could reach four thousand kilos per square meter. The volumes of the machines at that time dictated the size of the premises where the bays of the ground floor reached 25.50 meters in length and six meters in height from floor to ceiling, five meters for the first floor and 3.8 meters for the second.

The substructure, cornice and upper floor were made of cement and stone. The facade was not made of bricks but was covered with a layout lining of red bricks. These bricks were made exclusively for the Illustration printing press by a Belgian company. The roof was transformed into a terrace. The grounds were very marshy at some places and required landfills of five hundred and sixteen columns to support the reinforced concrete structure.

As far as esthetics were concerned, the plant, in lieu with the Modern Movement, composed of a large three-story building with long horizontal facades one hundred and forty one meters long and ninety meters wide with wide openings pierced for daylight, all this was built around a garden courtyard and a yard with sheds. An eight-story tower about sixty four meters high and topped with a disproportionate clock, was located at the south corner of the building. The top floor contained a water reservoir of three hundred and fifty cubic meters, fed by underground drilling, made for sanitary needs and fire safety in the plant. It had its own power plant and at night four large spot lights illuminated the clock, which was thus given the nickname “the Bobigny lighthouse”.

The building housing the motor, heating system, garage and repair workshops was isolated from the plant to limit the risk of fires. The main entrance of the building was located at the foot of the tower and the hall was lined with marble. The gigantic Illustration printing press formed, in 1933, a new generation of industrial buildings, described as the model plant in the countryside, its tower accentuating the horizontal-vertical geometry of the assembly. The tower, like a semaphore, stood the tests of time in the landscape of Bobigny during the Second World War. The magazine Illustration continued to be printed and became a tool of Nazi propaganda under the direction of Jacques Lesdain, a zealous collaborator. Prohibited at the liberation, the journal was reborn in 1945 under the heading France-Illustration until 1957. Then, with highly qualified personnel and high level technical machines, the plant printed different magazines, art books, museum guides or reproductions of paintings. Yet despite significant union struggles by the last three hundred workers in this bastion of quality printing aiming to prevent its closure, the printing press stopped operating in 1971. After having served as warehouses for the SET transport company whose name had been carved at the top of the tower until 2003 (even though it had left the area since the 1980s), the premises were finally abandoned. The premises were repurchased by the town of Bobigny in 1990 and conceded for the symbolic French-franc to the University Paris-XIII.

In 1998, rehabilitation of the site, by architects Paul Chemetov and Borja Huidobro, began and the first students settled onsite the following year. The new premises were inaugurated in January 2000. The architects respected the former buildings while adapting it to its new destination, making the premises spacious,  pleasant and bright. The top of the tower found a new clock in 2003 and has since displayed a new logo, Paris-XIII. Just like a semaphore recalling the industrial past of Bobigny, which is inseparable from the landscape. An important pole of the IUT – technological university institute - University Paris-XIII, the former printing press welcomes over 7000 students today.