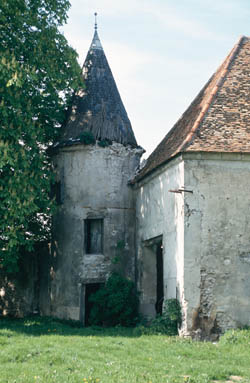 Located in Tremblay en France near Paris, the Château bleu or Château des Tournelles is a former property of the abbots of Saint-Denis. Sold by Cardinal de Retz, the last abbot of Saint-Denis, at the end of the 14th century, it became the residence of the lords of the fiefdom of Tournelles until the French Revolution of 1789.

Until 1980, a farm remained in operation on the land of the former fiefdom of Tournelles. However, in the early 1990s, the project to create a hotel complex with a thousand rooms threatened the site. The city of Tremblay en France used its right of pre-emption and bought it in 1992, thus saving the Chateau Bleu from destruction. Tremblay-en-France has set up an inter-communal equestrian centre with the towns of Aulnay-sous-Bois, Blanc-Mesnil, Sevran and Villepinte. The architect Massimiliano Fuksas, who designed the National Archives building in Pierrefitte, was in charge of the rehabilitation of the site. This essentially consisted of reconverting the existing buildings, while respecting the original heritage, in order to house the equestrian centre with, in particular, four covered riding arenas.