The National Archives have relocated to Seine-Saint-Denis

The National Archives have now moved to the modern site of Pierrefitte-sur-Seine in Seine-Saint-Denis and preserve some milestones in the history of France. 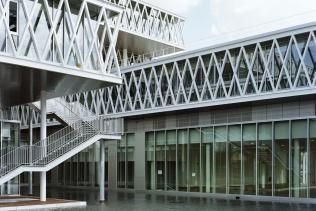 In 2013, the National Archives moved to Pierrefitte. After a relocation that lasted five years, a part of the history of France moved from the district of le Marais to settle in Seine-Saint-Denis.

Why relocate the Archives?

The Archives took advantage of this move to modernize their methods of conservation and restoration. Each space has been entirely rethought so that no workshop is exposed to direct light. This modern building is the symbol of a total reorganization of the National Archives. New spaces were needed for the Archives because of the daily contribution of collections. Furthermore, the airport Charles de Gaulle is located just 17 km away and it is directly accessible by A1 and A86 motorways and also thirty minutes from the Parisian stations. The Archives attends to the increased demand of accessibility by international researchers. Finally, the site groups together all personnel until then dispersed and allows for a new reorganization of the preserved documents.

Some years back, the Diplomatic archives moved from the Quai d'Orsay to La Courneuve. Henceforth, the National Archives have been relocated to three sites: Paris, Pierrefitte and Fontainebleau. The Parisian site houses public collections prior to 1790, at Pierrefitte all National Archives dating from 1790 are kept. And subsequently at Fontainebleau, one can find the electronic and audiovisual archives which require specific processing treatment.

What is the role of National Archives?

Created during the French Revolution, the National Archives hold records from the different political regimes, from the seventh century to present day, as well as private archives and the summary proceedings of Parisian notaries. Today, everybody can inspect public records. The documents that mark the history of France are kept in this institution: the Merovingian papyri, the trial of the Templars, the journal entries of Louis XVI, Napoleon’s Will, the Declaration of the Rights of Man and the Citizen, the oath of the Jeu de Paume (a pivotal event during the French revolution) and all successive Constitutions of France…

To Collect, store, communicate and understand its collections; these are, in fact, the fundamental tasks of the National Archives. Two objectives have prevailed in the Pierrefitte project : secure storage for optimum conservation and spaces open to the public. Since 2007, the archive teams dust, repackage and clean the collections to be moved. The collections were transferred according to core themes : Education-Culture, Executive-Legislative, Interior-Justice, Environment, Territorial development and Agriculture, Work-Social Affairs, Private Archives. Maps, plans and photographs were transported at the end of the moving-operation to be integrated into the specific areas equipped for their conservation and storage. Restoration workshops and the image center in the new building were both planned and designed to accommodate these maps and plans that can be as high as eight meters when unfolded.

The work project designed by the architect Massimiliano Fuksas was chosen. The architect answered to the request of a functional place and drew inspiration from the existing and emerging urbanization. He designed the New National Archives keeping in line with the residential area boarding the grounds, Paris VIII University, existing market gardens, and in the distance the clos Saint-Lazare, Basilica Saint-Denis and Stade de France.

Conducted in coordination from the outset with the territorial and cultural board of Plaine Commune, the National Archives project is a restructuring element in urbanization development in a sector called "Tartres". Florence Mercier joined the team to work on the outside of the building, the gardens and landscape to keep in harmony with the houses that are nearby.

Visit the National Archives in Pierrefitte 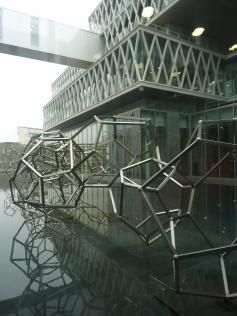 This contemporary monument is divided into two separate wings: an imposing monolithic block closed for conservation and "satellite" structures to create facilities for the public.

The building houses 220 archive rooms, located on 11 floors with 320 km of shelves: a paper monster. The impressive quadrilateral building is clad in aluminum and opaque glass. Its diamond-shaped design recalls one of the elements in the pediment of Saint Denis Basilica which can be seen in the horizon. Within this concrete block, the architect introduced gaps, great shafts of light, bringing light into the workspaces. In this way, archivists circulating in the corridors do not feel their workplace as a blockhouse.

The satellite building structures have a less uniform architectural treatment; a diamond-shaped motif, artistic works, footbridges connecting one place to the other, an opening into the outside with large glass facades.

In these areas are located ; offices, exhibition hall; projection room, reception areas, and restroom. The ceiling of the lobby and reception area were designed and decorated by the artist Sussanah Fritsher, one of three artists working within the framework of the programme "1% for Art". The metal ceiling plays with a shading-off of color to give lightness and transparency.

Two more artists, who are part of the programme "1% for Art" exhibit their work. Work by the artist Pascal Convert was selected – it concerns the walkways for the public. Visitors will discover a multitude of luminous sheets of glass embedded in the ground. A sculpture made by the artist Anthony Gormley, a random rotation system of polygons, was selected to decorate the water basin situated between the hall and reading area. The building is reflected in the water basins that surround it, giving a certain dimension to this monument of aluminum and glass.