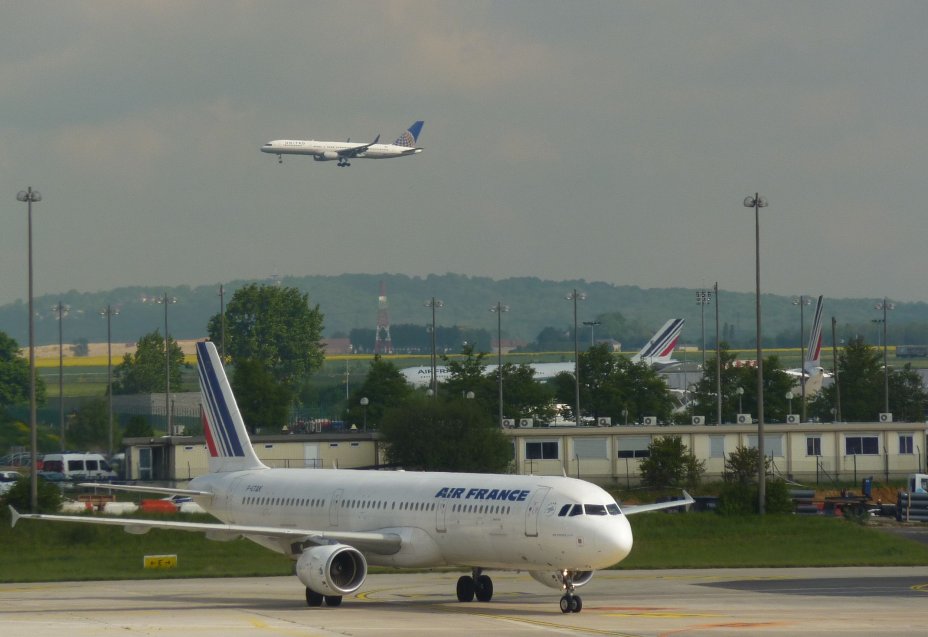 Paris-Roissy Charles de Gaulle airport is located about 23 km (14 miles) to the North East of Paris. CDG is the first and one of the largest French international airports and second largest European platform in terms of passenger traffic after London Heathrow International Airport. It is a hub of 170 airline companies connecting more than 300 cities worldwide. It is thus the most efficient European airport with the highest number of interconnecting possibilities within a time range of two hours. The airport complex actually stretches out over three departments and covers the following regions: 95-Val d’Oise (Roissy-en-France, Épiais-lès-Louvres), 77-Seine-et-Marne (Mauregard, Le Mesnil-Amelot et Mitry-Mory) and 93-Seine-Saint-Denis (Tremblay-en-France)… 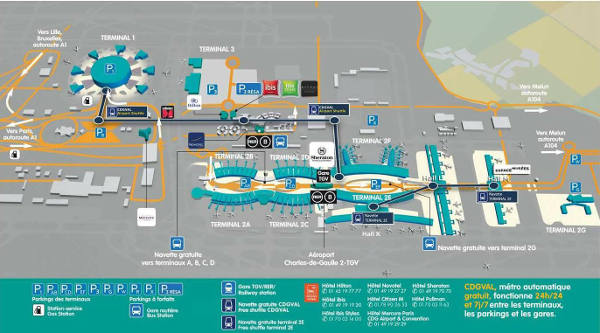 - By car motorway A1, A3, A104, RN2
Parking CDG airport – consult the map to locate the parking in your terminal.

Roissypole bus station is located in the heart of the airport between the T1 and T3. It gives you access to long-distance coachs, Pairs region buses, etc.

>> Between now and 2025, numerous works will be carried out on line B of the RER. There will be weekends when access by RER will not be possible. Substitute buses will then be put in place. You should therefore plan more time and get information from the Aéroports de Paris website or on their social network account Twitter, website  ratp.fr or transilien.com (the latter 2 indicate the transport routes in real time).<<

> Bus 351 runs every day between Roissy-CDG and Paris-Nation (2 av du Trône). It takes about 2h. In Paris "Nation" you have access to the RER A, metro line 1, line 9, line 6 and line 2 during the day (closed at night between midnight and 5am).

For night journeis, take the Noctiliens 143 and 140 with a departure-terminus at Paris Gare de l'Est.

Roissybus-RATP – Departure Roissybus in the center of Paris at Opéra station (at the corner of  rue Scribe et Auber) from 3h15 p.m. with a fifteen minute frequency daily, every  20 minutes from 8 p.m. to 10 p.m. and every 30mn beyond ten o’clock until the last shuttle at 0.30 a.m. (The navigo 1-5 zones is accepted on weekdays and all zones during the weekend covering Ile de France, there is no zone limit.)

What RER between Paris and Roissy CDG ?

Only one RER line: line B (direct line)

Preparing your journey from CDG airport

Before leaving, don't forget to check the information about your luggage: regulations on products forbidden in the hold and in the cabin, weight and size of suitcases, luggage storage, etc.

The Bagages du Monde locker is located in Terminal 2 - TGV RER station. It is open every day from 6am to 9:30pm

Booking a hotel near CDG airport

Several accommodation options are available near the airport. Opt for a hotel in the proximity of the airport or sleep in a hotel close to RER B station (which links the Paris Nord 2 business center, Parc d'exposition de Villepinte). Line RER B serves the three terminals of Roissy Charles-de-Gaulle. Book your accommodation around Gare du Nord which is very convenient also as the RER towards CDG is direct from Gare du Nord (20 minutes). There is also the option of staying in a hotel close to the A1 or in accommodation in the proximity of A3 motorway.

Tourist information board in the airport terminals

For visitors who need information on public transport in Paris- Ile de France, schedules and shuttle time between Paris-Charles de Gaulle airport and the nearby hotels and residences or the center of Paris, visit the tourist information board in the different terminals at the airport Paris Charles de Gaulle. Tourism information will inform you of the different events, news and major attractions to help you make the most of your stay and visitors will also be able to buy transport tickets at the tourist board…

Get more information about luggage regulations.

What to do in the airport to pass the time?

While waiting for your plane in CDG there is a choice of interactive playing spaces for children. There are also other activities such as games, light therapy and massage and multimedia kiosks, tax-free boutiques for all kinds of shopping and even a prayer-room…

Since late December 2013, a relaxation area devoted to digital books has been set up in the departure lounge of terminal 2G in Roissy CDG. This free service allows passengers to read the national and foreign press and a varied selection of books.

The airport provides assistance to people with reduced mobility, or other forms of disability.