How to get to le Bourget Exhibition Center 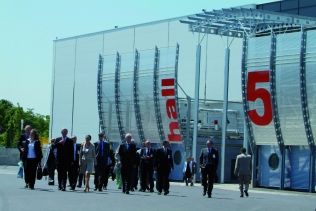 Whether you are coming on a business trip to Le Bourget for general or professional reasons it is necessary to organise your trip (public transport RER, bus or car) from Paris or from the Parisian airports. Otherwise it is necessary to know where to park around the Exhibition Center, book your hotel or find a restaurant,….

Take a look below to find the stations located north of line B between Antony (close to Orly airport) and to Roissy CDG airport as well as the RER stations including the different tarif zones crossed.

Source: Sncf Transilien - download the map of RER line B, and  timetable,...

Coming from Gare du Nord Paris to get to le Bourget...

When you arrive at Gare du Nord Paris, go down to the third level - platform 43 to take RER line B direction Mitry-Claye-CDG 1 et 2 Airports. Between Gare du Nord station and le Bourget, there are 3 stops and one train every 15 minutes.

In case of problesms on line RER B, take the Metro or bus to get to or come from le Bourget

In the case of  a strike or transport problems with RER B, take the metro line 7 at la Courneuve/Aubervilliers stations and after the free shuttle or bus 143 to Jaurès-Division Leclerc and then bus 152 which will drop you off Michelet station for the Parc des expositions.

If you have booked your hotel room in Paris close to Porte de la Villette, it is easier to take bus 152 (departure at La Villette; it also serves métro Ligne 7 and tramway T3b)  to the bus stop Michelet-Parc des Expositions Bourget (take a ticket for zone 2-3)

To visit the Air and Space Museum (entrance to the permanent collection is free) go 2 stations further.

The wait for the 152 bus is about 10 minutes on weekdays and 15 minutes on Saturdays (on Sundays, about 20 minutes between 2 buses).

Aéroports de Paris boasts three airports around Paris and one of them is for private, business purposes and the other two for the general public: Le Bourget business airport, Roissy Charles de Gaulle and Orly.

The distance between the two sites is about one kilometer, which is barely about two minutes by car and two stops away by bus 152 from Porte de la Villette.

The airport Roissy Charles de Gaulle is located in the north east of Paris 15 kilometers from Le Bourget Exhibition Center.

RER line B – stop at Le Bourget – and then take bus 152 direction Blanc-Mesnil, and get off the bus at 'parc des expositions'.

For a trip by taxi or by car, take the highway A1 from Roissy CDG direction Saint-Denis- Paris center then the N2 in direction of Le Bourget (count for about 20 minutes at least).

The organizers of the trade fairs often offer free shuttles to come or go from le Bourget exhibition center. When you book your access badge for your professional trade fair, shuttle information is clearly available on the website of the fair trade organizers.

How to go from Orly to Le Bourget exhibition park ?

Orly airport is located in the south of Paris over two of the Parisian departments (91 and 94). You can get to « parc du Bourget » by taking Orlyval to Antony and then take the RER B to the stop 'Le Bourget', take the bus 152 direction Blanc-Mesnil – get off at 'parc des expositions' (public transport takes about an hour with a ticket zone 1 to 3).

From Gare du Nord to Orly

From Gare du Nord to get to Orly airport, you have to go down to the third level to platform 42 direction St Rémy-les-Chevreuse /  Orly airport. Get off at Antony and take the Orlyval.