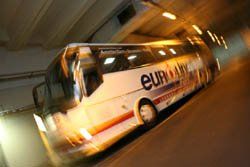 The Roissypôle bus station is located between Terminal 2 and Terminal 3 at the Charles de Gaulle airport near hotels, the RER B station and parking lots.

You can take the night bus - Noctilien - to travel between Roissy terminals and Paris (Gare de l'Est - Gare du Nord) via the N140 and N143.

There are also several bus companies that can drop you off in neighboring cities or departments to the north and east of Paris. (see below)

What to do during your stopover at CDG?

The main French and European bus companies that stop at the RER train station/Roissypole – are Blablacar Bus and Flixbus.

The long distance bus companies are mainly situated at the Terminal 3 of the Charles de Gaulle –Roissypole airport. It is easily accessible as the bus station is close to the RER B - Aéroport CDG 1 station, several departmental bus lines (such as Filéo, CIF, Noctilien) and buses that will take you to Paris (RATP, Roissybus). All buses for “Ile de France” are on 5 platforms, with destinations such as Bobigny, Le Bourget, the Villepinte exhibition centers, Paris Nord 2, le Blanc-Mesnil, Tremblay en France, Paris, etc...

From the TGV - Aeroport Charles de Gaulle 2 station, close to Terminal 2, take the free shuttle CDGVAL to get to the bus station in just a few minutes.

Check out our Access page, transport and parking at Roissy CDG.
See the general map for parking lots, terminals and Roissy CDG.

Where to take the Blablacar at CDG ?

From the RER B station, follow the signs "Gare routière", take exit 1.

You can buy your ticket on the Blablacar Bus website or at the Roissypoles ticket office - rue de Luxembourg (near Terminal 3).

FLIXBUS - in France and abroad

FLIXBUS coaches are located in the Roissy CDG bus station. These low-cost journeis can take you to go to Le Havre, Rouen or Dieppe but also Calais, in various cities in the south of France, abroad. Flixbus is a company that offers international trips with different departure sites around Paris. 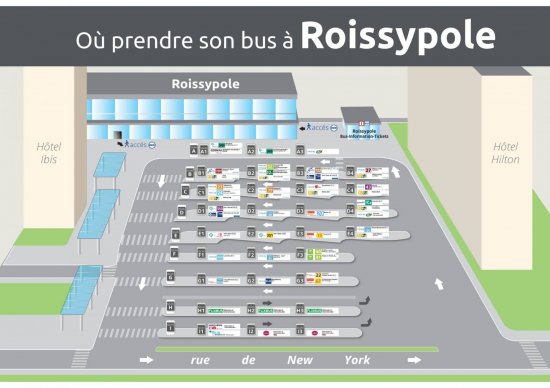 How to go to Park Asterix from the Airport Paris Roissy

To go to Park Asterix from Airport Roissy CDG you can take a direct and paid shuttle which runs during the opening days of the park. You can take it from 9 a.m. to 6:30 p.m., frequency is about every 30 minutes.
At the RER ticket office you can buy your tickets for the shuttle. Information  +33 01 48 62 38 33.

Transfer between Airport Roissy Charles de Gaulle to Disney Park is possible via the VEA shuttle which proposes a paid bus service between the airport and the Disneyland Park hotels. It runs everyday from 9 a.m. to 8:50 p.m. from the airport to Disney and between 6:30 a.m. to 7 p.m. from Disney to Roissy.

Buses “Disney Magical Shuttle” are parked at platform Terminal 2F – (door 8). You can take this bus at the RER B train station – “Aeroport Charles de Gaulle 2 – TGV” and cross through the different zones of terminal 2 which will take you to shuttle departures T2F.

From the bus station, Terminal T1 and T3 take the free shuttle CDGVAL to T2F. Go to the arrivals level and go to door 8.

To reserve a hotel situated near the airport zone of Paris CDG, consult the list of hotels in Roissy-Tremblay in France or apartment hotel, city apartments in Roissy, Villepinte.

A shuttle will take you Aeroville shopping mall to allow you to shop or to go to the movie theater.