In the 1980s, the international airport CDG increased in size thanks to a modular terminal building which never ceased to evolve. It has moved from two modules to six and it is becoming one of the most important aerian  performer hubs. This terminal 2 or as it is called CDG2 was designed by Paul Andreu who also designed the first terminal in CDG. The history of this terminal is an integral part of Air France, the major company occupant at this terminal. 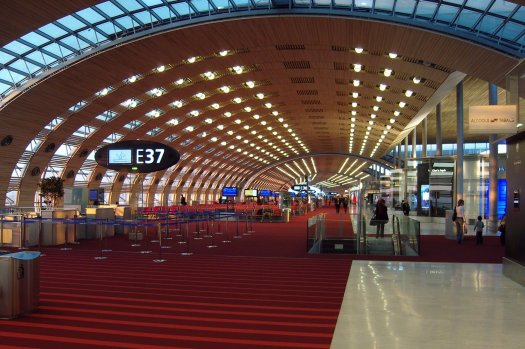 Today, Terminal 2 at Roissy airport counts for 6 terminals : A, C, E to the south and B, D, F to the north served by free bus-shuttles. These terminals, or modules, are separated by a highway and parking lots. A boarding satellite is connected to terminal A with a footbridge, two others (S3 and S4) are connected to terminals E and F. Between terminals C and D and terminals E and F, you can find the station Aéroport Charles-de-Gaulle 2 TGV and the RER B line to Paris.

Services in the T2 at CDG

Terminal 2 includes many services such as shops, bars and restaurants.

A museum is located in terminal 2 and you'll also find exhibitions such as "1900 La Belle Epoque" or "Student's views on the city of lights". Check here for all practical information, plans and access to Terminal 2 as well as accommodation information to find a room next to Terminal 2.

In 1982, François Mitterrand inaugurated the 2nd terminal (A and B) in Roissy airport which was completely dedicated to the Air France Company. Terminal 2B was built first. Its narrow long shape was totally adapted to its function : receiving passagers quickly on short-haul flights. Terminal 2A, designed to take travelers on long-hauls flight, is larger so as to house the control zone. Both were singled out at that time due to the fact that departures and arrivals took place in the same terminal.

Terminals 2E, 2F and 2G were built in the 1990s to adapt CDG international airport to the new restrictions for airline companies.

Air France opened its first hub in 1996 to optimize the flow of travelers’ transit through the airport by increasing air traffic and  making traffic flow. This was the revolution that allowed the French airline to significantly increase its transit flight offers. But, this revolution was soon restrained by the size of the terminal, which could not, with its four terminals, allow for correspondance flights in a lapse of time under forty five minutes. Terminal 2F opened in 1999 for the use of Air France only to solve this problem.

From that moment, ADP ensured that each terminal use a more efficient baggage sorting system to decrease the time between flight connections.

Terminal 2E, built in 2003 collapsed in 2004, one month after the beginning of renovation works on the first air terminal which remained closed until 2008. These closures rapidly caused more saturation. Until its reopening in 2008 and the reopening of the 2E also, the opening of Terminal 2G in 2008 for regional flights took pressure off the airport.

Hall M in terminal 2E is considered as one of the most beautiful in Europe.