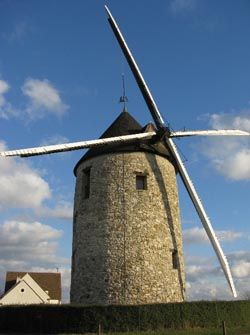 Montfermeil, proud of its past, is now in full expansion. Church, castle, museum, fountains add a certain charm to the town.

A tardenoisian civilization, four to five thousand years old already committed Montfermeil to memory. Several vestiges attest, if not the settlement of prehistoric man, at least his passage through our forests. Is it the small Fort supposedly from the end of the fourth century or rather the former castle of Moustier surrounded by moats that Montfermeil takes its name? The origin is said to be Latin "montem firmaculum" (closed mount). Montfermeil was known under the Latin form "Montefirmo" in 1122 and after "Montfermolio", in 1124 in the general cartulary of Paris.

Montfermeil was not mentioned under its current name until 1209, with the birth of the written and spoken recognized French language. In the Middle Ages, the town was divided into several fiefdoms clustered around the old country, mainly agricultural. Jeanne D’Arc made a halt in the town in September, 13th 1429. In the second half of the fifteenth century, the Seigneury was united by Gaspard Bureau, the grand Master of the artillery of Charles VII, and then to Louis XI. The country developed under the protection of its successive lords. One of them, Antoine Pelissier, began the construction of a magnificent castle in 1678 that Michel de Chamillard, Minister of Louis XIV, finished. This castle became the venue for splendid festivals and was recently used as a film shooting site. Abandoned in the early twentieth century, it quickly fell into ruin and was demolished in 1929. Schools for girls and boys replaced it.

Montfermeil boasts many treasures such as churches from the twelfth or thirteenth centuries, the Château des Cèdres, the small castle, the museum of ancient tools, the Lassaut and Jean Valjean fountains, the Sempin windmill, the old village… An important number of celebrities lived or sojourned in Montfermeil : painters, generals, inventors, writers such as  Seurat, Corot, Daubigny, Peulot. Worms, Paul de Kock, Lucien Noel, Honoré de Balzac, Jean-Baptiste Clément, Frantz Funk-Brentano. But the most famous of all of them was undoubtedly Victor Hugo who, during his visit, encountered the frail silhouette of Cosette and the Thenardier family. In 1823 he wrote "there was not in Montfermeil, neither many white houses nor  many satisfied bourgeois. It was just a village in the woods".

Every year, on the esplanade of the prestigious Château des Cèdres the "Son et Lumière" festival takes place - a show on sound and light tracing the history of the city. As well as these perennial events, it is also possible to participate in a tour of an industrial site or a walk in the neighborhood to visit the town and surroundings areas.