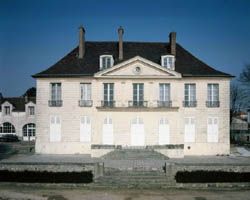 In 1907, the novelist Tancrède Martel placed the story of one of his novels, Le Prince de Hanau, in Montfermeil. The book’s plot is set in a castle dating from the seventeenth century which the narrator called Le château des Cèdres because of the magnificent cedars in the park. Since then, this name is attached to the building.

A classic architecture and Ionic pilasters

It was Denis Néret, attorney to the Chambers of Paris who ordered the construction of the castle towards 1640. His heirs preserved it for more than a century after his death. At the time of the construction of the building, architecture answered to the rules and regulations of classicism. Artists at that time, corresponding more or less to the reign of Louis XIII, from 1610 to 1643, freely interpreted, just like during the Renaissance period, antique Greco-Roman art. They used curves and broken lines as well as Doric, Ionic and Corinthian orders. The ornamentation lies between the sobriety of Greco-Roman and the ostentatious elements of Italian and Flemish baroque art. The architect of the château des Cèdres in Montfermeil opted for the first approach.