Art and History Museum of Psychiatry 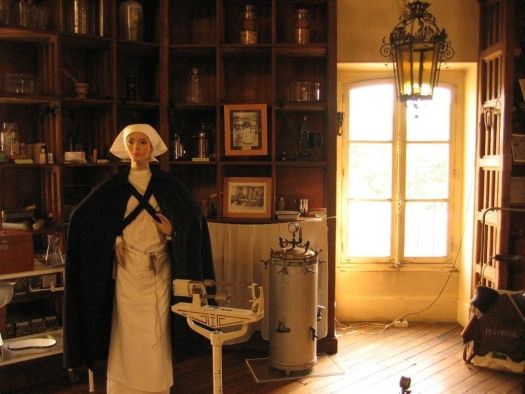 The SERHEP, [Society for studies and historical research in Psychiatry], opens the doors of its small Art and History Museum of Psychiatry  to the public every Friday throughout the year.  The museum located in Neuilly-sur-Marne relates the history of psychiatry through a unique collection of therapeutic equipment and crazy  machines to heal tormented minds. The SERHEP incessantly constructs and deconstructs the history of psychiatry, society and ideas. It stimulates and produces work studies and creations. It guides and welcomes visitors from Ville-Evrard and has made the heritage open days the occasion for historians and the general public to discuss psychiatry.

Society for studies and historical research in Psychiatry was founded in 1986 by staff members of the public health care institution and supported by the institution. André Roumieux, whose book "Je travaille dans un asile d'aliénés" (I work in an asylum for the insane) was a resounding success in the 1970s, he was one of the inspirations for its creation.
Set up as part of a project to preserve the archives and heritage of Ville-Evrard, it immediately specialized in the history of the "oubliettes" (the forgotten), in the words of psychiatrist Lucien Bonnafé, by declaring the history of psychiatry to be inseparable from that of human societies and, above all, by refusing to erase it.
SERHEP thus works to build and transmit the history of places and people who pass for not having any.

From its creation, the association began collecting documents and objects relating to the history of the site and of the Ville-Evrard public health establishment, psychiatry, work in psychiatry and care practices. After 2000, with the creation of an archive service, SERHEP refocused on its mission of studies, historical research and valorization of the history of psychiatry.

Understanding the History of Psychiatry and Ville-Evrard

Ville-Evrard Psychiatric Care Facility vacated part of its facilities from this historic site. The safeguarding of all that makes the history of psychiatry and Ville-Evrard possible, the collection of objects, documents, testimonies, are today an absolute necessity. It is not a question of being nostalgic for the asylum: the transformation that takes place may be an opportunity, by developing the SERHEP's activities on the Ville-Evrard site, to offer a real interface between psychiatry, the city, the world of research and the arts. Neither psychiatry nor society can advance in the field of psychic disorders without leaning back on history, - even and above all, that of incomprehension. SERHEP deployed all its efforts so that in the future Ville-Evrard, a true "City of Spirits", will finally exist: a crossroads of ideas, creations, research and events, a unifying and attractive place.

This museum of art and history of insanity, mental health and psychiatry is located in the former central cloakroom, on the second floor of the general services of the asylum. It presents a permanent collection, regularly enriched with donations and acquisitions and, very regularly, temporary exhibitions.

It offers a wide approach to psychiatry, insanity, mental health. The complex, multidisciplinary, social, economic, political, artistic and philosophical history that the visitor discovers here, allows to modify the perspective, very often frozen, in which mental illness and care are placed.

Different themes are treated, among them :

The creations produced by the people treated in psychiatry (painted, sculpted, written works) are on display in their artistic dimension and highlighted. Also on display are works produced in the workshops of artists working with the care teams in the Ville-Evrard sectors.

The museum opens on Fridays and by appointment.

The Great War: the heritage of sick patients and art

A clock that chimes "serene hours" « Heures sereines » was made by a patient for Dr. Maxime Dubuisson, doctor-director of the Saint-Alban asylum during the First World War. Subscription request for the restoration of the Bonnafé Clock.

The Ville-Évrard Asylum celebrated its 150th anniversary in 2018.

Discover our visit for groups to the former Asylum of Ville-Evrard and its grounds.

Learn more about the Raw Art of Psychiatry Patients..