Things to do and see in Montreuil

Montreuil, with its historical traces, its cinematographic past and its alluring cultural-events programs, is well worth a visit… 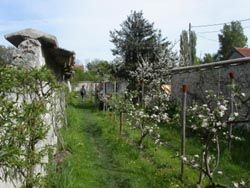 Montreuil comes from the Latin word "monasterolium" meaning small monastery. A first trace of the existence of  the village can be found in a ruling by the Merovingian King Thierry IV. The village became more important from the reign of Philip 1st, thanks to its vineyards and the higher-clergy and nobles who summered in the town. The kings of France frequently visited the town. Saint Louis used to go to Montreuil to celebrate “Easter-Day” Charles v and his wife Jeanne de Bourbon were baptized there in 1375. The presence of all these nobles and higher clergy allowed the Montreuillois to pay less taxes and to benefit from different privileges. From the XVI century, Montreuil suffered a decline and the end of a golden era as the kings of France abandoned Vincennes for Fontainebleau and Saint-Germain. After the revolution Montreuil was given the name of Montreuil sous Bois. Gradually the town became urbanized and industrialized to become the town we know today.

Monuments dating from the Middle ages

The Montreau Estate already existed in the XIII century. But it is only in the XVIII century that the castle was built; a long edifice surmounted with attics and a wing which was destroyed in 1870. Just two of the entrance pavilions remain. In the park Montreau there is a basin and a dispensary dating from the eighteenth century, a greenhouse and the “Histoire Vivante museum” – a Living History museum, in which there is an important iconographic selection of portraits and paintings of Marx, Engels, Blanqui, Louis Michel and Jules Vales. It also benefits from a collection of the Resistance with tracts, leaflets, underground newspapers, prisoners’ journals, camps and barracks.

The church Saint Pierre-Saint Paul, dating from the Middle Ages, was transformed many times in the course of History;  from the reign of Saint Louis who decided to embellish it in the style of Notre Dame. You can still see the square bell tower and choir of the XIII century which are both currently being restored. In the XV century, after the 100 Year War, the nave was erected. The side aisle where are the Baptismal fonts are located, date from the XVIII century. Organ concerts are held here all year long.

At the end of the XIX century, Montreuil was witness to the early stages of the film industry. From the creation of the first studio in the world by Georges Meliès, to the invention of the cartoon by Emile Raynaud  including the construction of the Charles Pathé studio in 1906 at 52 Sergent Bobillot road, a rich cinematograhic heritage saw the light.  Ninety years later, and even if the Melies studio have since been destroyed, we can still see the glass structure of metal and glass of the Pathé Albatros studio which was bought by a company at the end of the twenties.  From this site emerged Silent films and films by René Clair, Jean Renoir or Abel Gance. The studio has been registered in the historical monuments inventory since 1997. The actual municipal cinema is called Georges Meliès, and there is a good balance between quality films for the public as well as other rare collector films.

The vegetable gardens in Montreuil have been around since the XVI century and famous for their tasty fruits, in particular the peaches that Alexander Dumas considered to be the best in France. They were separated by flint and plaster walls to give peach walls. Plaster had the virtue of preserving the heat from the sun which kept the fruits warm at night thus guaranteeing the fruit ripening at the same period as those in the south of France. Vestiges of these peaches-walls”murs à pêches” can be seen at Saint Ambroise road and Jardin-Ecole road. Since 1936, Montreuil town hall has been the custodian of a Paul Signac painting “ Au temps de L’Harmonie” which was finished 1895, pointillist or neo- impressionist, it is showcased at the top of the great stairs. It symbolizes the artist’s social concerns and has already been shown at several exhibitions in France and Europe.

Fair for children’s books and press, music and theater

Le Centre dramatique national de Montreuil is a place for theatrical creation open to the different art and drama creations for all ages.

La Pêche, a musical French coffee bar was created on October 8th, 1994, at the initiative of the local council. This coffee bar has become a musical mecca of rock, rap, rai and Afro-jazz music in just a few years. The venue proposes one concert per week in the 200 seat concert hall and fast food facilities at midday. La Pêche offers various services such as rehearsal hall renting, exhibitions for young artists works, debate organizations on all subjects of society.

The Instants Chavirés adventure began Philippe Bachetta and Thierry Schaeffer and their desire to defend and illustrate the new trends in European jazz; to discover and support young musicians and host their collections. They do not hesitate to co-produce live records by the artists who perform there. Do not miss the venue to see a choice of artistic talents and affordable prices.

Maison populaire, founded in 1968, is a place of expression open to more than one hundred musical activities such as artistic works, physical activities, scientific techniques as well as activities related to new technologies ( Information via Internet, multimedia). They all coexist with reflection-workshops on geopolitics, philosophy, sociology and psychoanalysis, to set up bridges between all these different fields of thought. An art center “Espace Mira Phalaina” and a concert hall "L’Argo’notes" are both located on the site. The National School of Music and Dance’ (ENMD) situated in the city center welcomes about 800 students, initiating them to various instruments, to music theory, and singing, classical and contemporary dance. Jazz lessons and most music, junior orchestra, instrumental and vocal, chamber music and choral are also proposed here.

Berthelot theater presents a variety of quality shows. With its ten thousand members,  Montreuil is a sporty town. It disposes of  several sports facilities : tennis courts, an Olympic-sized swimming pool and pool for children, about twenty gymnasiums, five stadiums and six pitches. Elan sportif of Montreuil and the Red Star club Montreuillois are two major clubs for football, handball, climbing, skating, and judo. This enthusiasm for sport can be seen in the results. CAM (Club Athletics of Montreuil) was champion in France in 1997 and trained champions such as Michel Jazy and Serge Hélan, both Montreuillois. Many events are proposed all the year round: Walking tours of the parks, Paris-Montreuil-Colmar tour in May-June, football and tennis tournaments.

Noue theater is a small theater located in the Noue neighbourhood.