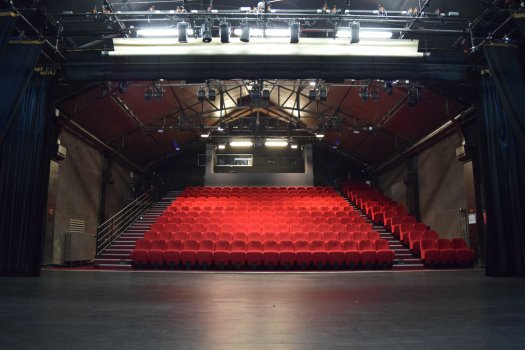 Berthelot Theater - a municipal theater located in the commune of Montreuil is an atypical structure. It was set up in a school built at the end of the nineteenth century, from where it got its name, and where the playground was used as a public hall for film screenings and shows. Georges Méliès put on several performances here. The present day layout is the work of Jean Guerrin (TEM – Montreuil theater school) who transformed it in 1979.

It also features a convivial space called « le foyer ». But the facilities are such that there is a fine relationship between the stage and an informed public and it is particularly appreciated by performing arts professionals even beyond the town itself.

Berthelot Theater is proud of its eclectic offers, by proposing a diversified and pluri-disciplinary programme for the general public: theater, dance, and shows for young people, concerts, film screenings, and conferences with the ambition to open up to other new developments. It accords an important place in the choice of creation for the locals in Montreuil, supported by fruitful contributions from elsewhere, and hosts emerging companies and other better known ones.

Located on the doorsteps of Paris at the metro station - Montreuil Croix de Chavaux - the Berthelot Theater is a very popular place for companies. Montreuil town authorities provide them with the best professional conditions for logistics and technical needs to allow them to finalize and make their work known to the public. This municipal theater definitively affirms itself as a welcoming infrastructure and support for open and innovative shows of theatrical creation.